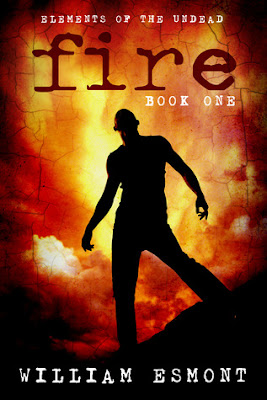 Synopsis:
No one knows what caused the dead to rise. No one knows what caused them to attack the living. Fighting for their lives, scattered survivors find the attempted cure to be almost worse than the disease. In the twilight of a shattered civilization, the fate of humankind rests upon the actions of a handful of war-weary survivors. Driven to a scorched corner of the former United States, they alone hold the key to a global reawakening. Or the final epitaph for a dead planet.
(Synopsis taken from Goodreads.)

My Thoughts:
I have had Fire for quite a few years now. Recently, I've been extremely sick, which has given me some extra time to read a lot of my older books in my tbr pile. After reading Fire, I am kicking myself for not reading it sooner. I loved it. In fact, I'm writing this review right after finishing Fire so I can read the second book in the series, Air, immediately.If you follow me on any social media site, you know I am slightly obsessed with zombies. I've read a lot of zombie books, and watched quite a few zombie themed tv shows and movies. I think that Fire is one of the better zombie books that I have read. In my opinion, it is an accurate description o what would actually happen in a zombie apocalypse. The one thing I loved that William Esmont did is that not only can a zombie infect a person by biting them, but zombie blood is also infectious. That's something that doesn't happen in a lot of zombie stories, but I feel like it would happen in real life.Esmont also creates some very complex characters that you just want to root for (or love to hate in one particular character's case). Even though there are several different points of view, all of the characters come together in a way that is brilliant. Also, one of the characters has a particularly nasty past, but once the zombie apocalypse happens, that doesn't matter anymore. I believe that's how it should be. My favorite character is Megan. She's been through hell and back, but she doesn't let it get to her. I can't wait to see what she does in the future.I loved Fire by William Esmont. It's one of my favorite zombie books that I've read this year. I think that Esmont has a great future ahead of him writing zombie/survival novels. I can't wait to see where he takes the story next. I recommend this series for fans who like The Walking Dead, with more realism. I also recommend it for people who like survival stories.

I received this book from the author, in exchange for an honest review. I was in no way compensated for this review.
Posted by Kayla Eklund at Thursday, December 10, 2015 No comments: 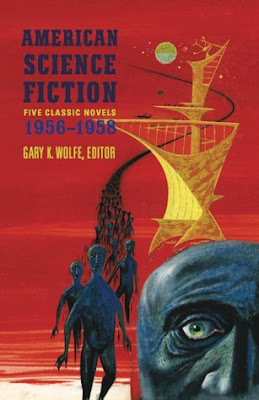 Synopsis:
This second of two volumes surveying the best science fiction novels of the 1950s presents works by five of the field’s most admired and influential practitioners. In Robert A. Heinlein’s Double Star (1956), an actor forced to impersonate a twenty-second-century political leader intent on forging bonds between Earthlings and Martians learns hard lessons about the nature of power. Alfred Bester’s The Stars My Destination (1956), which Neil Gaiman has called “the perfect cyberpunk novel,” is a classic revenge tale set in a nightmarish future dominated by corporations.In James Blish’s A Case of Conscience (1958), space voyagers on the remote planet Lithia find themselves challenged by the values of an alien civilization. Algis Budrys’s Who? (1958) unleashes Cold War anxieties about technology and human identity with its story of a scientist rebuilt beyond recognition after a devastating accident. Set in “the Place,” a bar and bordello in the backwater of time’s stream, Fritz Leiber’s The Big Time (1958) explores the implications of the “Change War,” an endless cosmic struggle in which shadowy antagonists dart in and out of history in a contest to control destiny.The range of styles—by turns adventurous, satiric, incisive—is as varied as the themes addressed by these novels, all now acknowledged as American classics. Together they mark an explosively entertaining era in modern fiction.
(Synopsis taken from Goodreads.)

Seth's Thoughts:
While not an elegant title for a book, it is quite accurate. Once you crack it open you find quite a few stories in it. The running time on this book if you are going to read it from cover to cover is quite long. You’re looking at a little over 20 hours of reading, possibly more.The first story in this collection is Double Star by Robert Heinlein. It follows the life of a has been actor who takes on a role of a lifetime. Quite literally it seems. While slow paced, it has a knack of keeping you interested to find out what happens to ‘The Great Lorenzo’. Overall, the story seems quite credible for science fiction. It keeps away from anything too exotic like light speed travel and all the other staples of sci-fi stories like giant star ships etc. The only thing unrealistic about it is the presence if aliens on Mars, but as this was something written back in the 50’s it’s to be expected seeing as how practically all planets in the solar system were perceived as being inhabited. I give this story in the collection a 4/5.The second story in this collection is The Stars My Destination by Alfred Bester. This covers an alternate history where sometime after man began to colonize other planets in the solar system and the asteroid belt, they discovered how to teleport (jaunt). This has a huge impact on how the world economy works. Cities spring up in unlikely places. Roads are left in disrepair. Telepathy becomes a thing with some people as well. This story focuses on the life of Gully Foyle who is left to die in space only to eventually track down and get his vengeance on those who left him to die. This story is much faster paced than the last one, which was a nice respite. I give this one as well a 4/5.The third story in this collection is A Case of Conscience by James Blish. This one follows the story of three men contacting an alien race for man for the first time. They aren’t nearly as advanced as man is in some aspects of technology because the planet they evolved on didn’t have enough heavy metals to do much with. But they had managed to develop flight with what was available to them. The three men observe and collect information on the aliens up until they have to leave. Upon leaving they are gifted with one of the alien young to take back to Earth with them. While I enjoyed this story somewhat, it left me wanting more from it I think. I can’t explain what. Anyways, I give this one a 3.5/5.The fourth story in this collection is WHO? By Algis Budrys. This one follows a cold war scenario with more technology than was available in our history. A man who was thought to have been dead was brought back from Russia, but his identity can’t be confirmed because all his identifying characteristics have been replaced by mechanical items. No teeth, no fingerprints, even his eyes have been replaced. As such, he is under suspicion for the whole rest of his life on whether he is an American or in reality a Russian spy. I also give this one a 3.5/5.The last story in this long winded collection is The Big Time by Fritz Leiber. It covers something called the Change War. It follows an entertainer who is stuck outside of space and time along with several others. They ostensibly ‘entertain’ time travelers who combat different scenarios in history where things could have gone horribly wrong. To be honest, I thought it was a quite boring story and was just glad to be done with this collection. I give this one a 2/5.

Want to know where to buy this book?

I received this book from the publisher, via NetGalley, in exchange for an honest review. Neither Seth nor I were compensated in any way for this review.
Posted by Kayla Eklund at Wednesday, December 09, 2015 No comments: