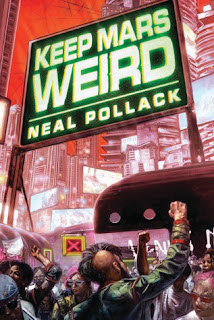 Synopsis:
Several hundred years in the future, a depopulated Earth has become a tolerant, progressive paradise. What could be better—or duller? Meanwhile, Mars is home to New Austin, a freewheeling human colony fabled to make Las Vegas look like a meditation retreat. After breaking the polite laws of Earth, earnest schoolteacher Jordan Kincaid finds himself forced to relocate. It’s either life on Mars or life behind bars.

But what promised to be Xanadu is more like Blade Runner . . . only with more waiting in line. Trend-chasing hipsters and obnoxious tourists have swarmed into New Austin at the expense of poverty-stricken locals, all overseen by a greedy megamogul bent on transforming the city into a gentrified nightmare. When a sexy but sinister heiress seduces Jordan, he finds himself on the wrong side of a literal real-estate rebellion, as the filthy rich and dirt poor battle for control of the next hot neighborhood. Forget about keeping it weird, someone’s got to keep Mars from becoming a hell off Earth.
(Synopsis from Goodreads.)
Seth's Thoughts:
I picked this book up not knowing what it was about. I admit though, that I have a science fiction addiction. I also like alternate future fiction as well. When both of those are combined I just can't help myself. Keep Mars weird is just such a story. Sometime in the past of the story Earth was able to colonize Mars. In the process there was quite a bit of conflict on Earth. This led to the population of the Earth being regulated to one billion people. Everyone on Earth has 'enough'. Enough food, enough room, enough health care. Nothing more. Societal classes are all but done away with on Earth.

Having said that, the story revolves around Jordan Kincaid. He was born on Earth, and was brought up in the mindset that everyone gets enough. Shortly into the story he gets shipped off to Mars and finds out that some people have more 'enough' than others. There is plenty of fun poking at the expense of socialists and capitalists alike. The story focuses on the struggles that Jordan and his friend face when confronted with an entirely different society than what they grew up with. I look forward to reading more in this series. I'm hoping it's a series anyways. I'll have to check with my wife as she's the one in charge of the books in the house.

I received this book from the publisher, via NetGalley, in exchange for an honest review. Neither Seth nor I were compensated in any way for this review.
Posted by Kayla Eklund at Tuesday, January 12, 2016