Cast in Angelfire by S.M. Reine 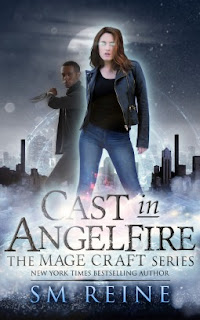 Synopsis:
Eighteen-year-old Marion can’t remember anything before waking up in the hospital. All she knows that a lot of people want to kill her. And her would-be assassins are not human…

Vampires are real. So are faeries and angels.

They all want Marion dead.

Surrounded by enemies, Marion turns to Lucas Flynn: a mysterious doctor who seems to know more than he’s letting on. He’s as good with a gun as he is with a scalpel. He fights like a demon but claims that he’s human. And he’s hellbent on protecting Marion.

Lucas claims that Marion is a mage: half-witch, half-angel with terrifying powers that could crack the world. But Marion can’t remember how to cast magic any more than she can remember where she comes from.

Marion must find her identity and her power…before the forgotten sins of her past catch up with her.

I love S.M. Reine's books. She is a very prolific author, and I've only read a couple of her series. Therefore, I wanted to make it a main goal of mine in 2019 to catch up on all of her books that she has written to date. It has been a few years since I have read anything about Rylie Gresham, and I wanted to try something that was close to that because I missed those characters. I decided to pick up the Mage Craft series, and I'm so glad I did. I loved the first book in the series, Cast in Angelfire, so much.

Being back with some familiar characters in Cast in Angelfire felt like coming home. It was great to reunite with these characters, and see what they had been up to since Seasons of the Moon: Cain Chronicles had ended. I did find some of the character's confusing though, especially in the beginning. I think we met them in the Seasons of the Moon: Cain Chronicles series, and I had just forgot about them because it's been so long since I've read the series. That's my fault though, and doesn't reflect on the book's quality in any way. All of S.M. Reine's books are slightly connected in the same universe, so I should have done a quick skim recap of the Cain Chronicles series before I moved onto this one. I also loved meeting some new characters as well

I thought that the plot of Cast in Angelfire was action packed. There was never a dull moment when I was bored. Even the parts where Marion and Luke were just in his truck, driving to their detestation were enjoyable. I thought it was fun watching Marion re-learn all of the information that was new to her, and seeing if she would discover Luke's big secret, which the reader already knew about from the previous series. Throughout the book, especially towards the end, I couldn't put the book down. I kept reading way past my usual bedtime because I needed to know what was going to happen next, and how Marion was going to get out of the situations that she got into.

Cast in Angelfire is definitely one of my favorite books that I've read this year. It felt so great to be back into the Descentverse, and to get to see some of my favorite characters again, along with some new ones. The cliffhanger at the end of this book drove me crazy. S.M. Reine has a great way of writing cliffhangers that leave you dying to know more. I will definitely be picking up book two, an d the other books in this series, as soon as I finish typing this review. I foresee myself binge reading the whole series this week.
I give Cast in Angelfire: 4/5.
Want to know more about the author?
Website:  http://www.smreine.com/
Facebook: https://www.facebook.com/groups/Armyofevil/
Twitter: https://twitter.com/smreine
Instagram: https://www.instagram.com/authorsmreine/
Goodreads: https://www.goodreads.com/author/show/4721318.S_M_Reine

I received this book from the publisher, via NetGalley, in exchange for an honest review. I was in no way compensated for this review.
Posted by Kayla Eklund at Wednesday, February 13, 2019