ARC Review: The Rule of Many by Ashley Saunders and Leslie Saunders 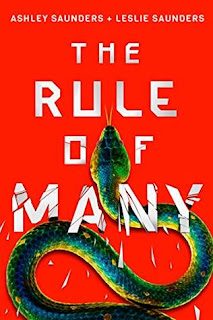 Synopsis:
Born to a death sentence in a near-future America, rebellious sisters herald a revolution—if they can survive.

Twins Ava and Mira Goodwin defy the Rule of One simply by existing. The single-child law, ruthlessly enforced by Texas’s Governor Roth, has made the sisters famous fugitives and inspirations for the resurgent rebellion known as the Common.

But the relentless governor and his implacable Texas State Guard threaten that fragile hope, as Roth consolidates his power in a bid for ultimate authority.

As Ava and Mira relinquish the relative safety of their Canadian haven to stand against Roth, new allies arise: Owen, a gifted young programmer, impulsively abandons his comfortable life in a moment of compassion, while Zee, an abused labor camp escapee, finds new purpose in resistance.

The four will converge on Dallas for a reckoning with Roth, with nothing less than their destinies—and the promise of a future free from oppression—on the line.

Disobedience means death. But a life worth living demands rebellion.
(Synopsis from Goodreads).

Last month, I read The Rule of One. I found it to be an enjoyable book. One of my rules for myself this year is to continue series if possible until I'm all caught up. I just happened to have an ARC of the next book in the series, The Rule of Many, on my Kindle from Netgalley. This month, I decided to read it so I can stick to my rule. I loved it even more than The Rule of One.

The Rule of Many was everything that I wanted in the sequel. It was action packed. There was never a time where I was bored, or wanted to skip parts. It kept me intrigued the whole way through. I read at night, and as soon as I would fall asleep, I would dream about the book. That rarely happens with me. When I would wake up, first thing I would do is grab my Kindle and start reading because I needed to know what happens next. It was also great to see the world expanded upon. I loved learning more details about the rules that are established, and the resistance against them. The rules are something that I could easily see happening within my lifetime, especially with the current state of our country. It's a scary situation.

At first, I wasn't sure how I felt about the added character points of view in The Rule of Many. Typically, I don't like books that have multiple character povs because I find that it can get confusing really quickly. However, the authors wrote each point of view in a way that really added something to the story. By the end of the book, I was intrigued by the extra characters' story lines just as much as the twins. My favorite point of view was definitely Owen. I loved his snarky, sarcastic humor. I also loved how loyal he was to Rayla, no matter what was happening. I could definitely identify with some of his personality traits the most.

I loved The Rule of Many. I can definitely see both books in this series ending up on my top books of the year list at the end of the year. Although, I do have to admit the ending of The Rule of Many killed me. I can't wait for the third book in this series. As far as I know, at the time of writing this review, it doesn't have a release date. That makes me sad because I need to know what happens next after everything that went down at the end of this book, especially with Theo.
I give The Rule of Many: 4/5.
Want to know more about the authors?
Website: https://www.thesaunderssisters.com/
Facebook: https://www.facebook.com/saunderssisters/
Twitter: https://twitter.com/SaundersSisters
Instagram: https://www.instagram.com/saunderssisters/
Ashley Saunders' Goodreads: https://www.goodreads.com/author/show/17895699.Ashley_Saunders
Leslie Saunders' Goodreads: https://www.goodreads.com/author/show/17322186.Leslie_Saunders

I received this book from the publisher, via NetGalley, in exchange for an honest review. I was in no way compensated for this review.
Posted by Kayla Eklund at Wednesday, March 06, 2019