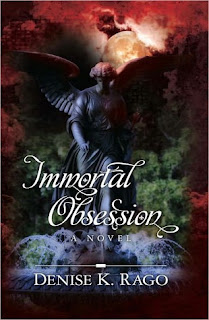 As a young man in eighteenth century France, Christian Du Mauré impulsively follows his best friend into the complex and warring world of the Parisian vampires. Against the backdrop of the French Revolution and following an affair with a mortal aristocrat, he promises to watch over her daughter - only to learn the child is his. Now settled in Manhattan, only two descendants of his union remain, Amanda and her brother, Ryan. After Amanda witnesses a savage murder in Central Park, she is determined to find the ethereal stranger who saved her life. When their worlds inevitably collide, Christian finds he cannot prevent Amanda from becoming a pawn in a centuries-old struggle for power. As a confrontation between ancient enemies comes to a head, Christian must face a betrayal from his past that still haunts him and threatens the woman he loves.
(Synopsis taken from Goodreads.)

My Thoughts:
Immortal Obsession was a great vampire book. The author's writing style reminded me a lot of Anne Rice's. The plot had me turning pages late into the night wondering what was going to happen next. There were no plot holes or editing mistakes that I found. There were several plot twists and turns. I figured out one of them near the beginning of the book. One of the characters dies, and that took me by surprise. I was sad when it happened. I really liked the character. The cover looks beautiful. I like how the red/orange and dark blue look together. I also like that the fountain is on the cover, since it plays a big role in the book. I liked all of the characters. I think my favorite character was Michel. I liked his attitude and his fashion sense. He wasn't afraid to introduce Amanda into his world. He also gave Amanda a little push in the right direction by telling her to go drop the note off to Christian. Immortal Obsession was a wonderful book. I would definitely read it again. I can't wait for the next book in the series. I recommend it for fans of paranormal romance. I also recommend it for Anne Rice fans.

I give Immortal Obsession: 5/5.

I received this book from the author in exchange for an honest review. I was in no way compensated or this review.
Posted by Kayla Eklund at Thursday, July 05, 2012