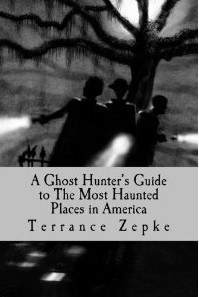 Synopsis:
This book features a detailed discussion of the fifteen most haunted places in America. The reference includes thirty photographs, fun facts, and visitor information including accessibility, tips, addresses and websites.
Discover the history and ghosts who haunt these places:
Trans-Allegheny Lunatic Asylum...where experimental lobotomies were performed.
Moon River Brewing Company...learn why no one is allowed to go to the top floor where the ghost resides.
Eastern State Penitentiary...where Al Capone spent nearly a year or maybe he's still there?
Shanghai Tunnels...where men and women were kidnapped and forced into servitude.
Waverly Hills Sanatorium...when TB patients died, their bodies were transported through a secret tunnel to an awaiting train.
Pirate's House...where pirate ghosts still demand rum.
Bobby Mackey's Music World...a brutal murder resulted in two hangings and at least three lingering spirits.
Colonial Park Cemetery...where thousands lie buried in unmarked graves.
Lincoln Theater...learn who "Red" was and why he remains here long after his death.
Belcourt Castle...find out why the ballroom is the most haunted room.
St. Louis Cemetery...learn why a voodoo priestess roams the cemetery.
Stone's Public House..dine in John Stone's old home if you dare!
Tombstone...there are 140 bullet holes, 26 deaths, and no telling how many ghosts inside The Birdcage Theatre.
Queen Mary...one psychic predicts there are at least 600 spirits on board.
Ohio State Reformatory...even though it has been closed for a long time, some prisoners remain incarcerated here.

My Thoughts:
A Ghost Hunter's Guide to the Most Haunted Places in America was a decently good reference book. The book had a few flaws. Improper grammar was used a few times. The author repeated herself quite a few times, which made the book tedious to get through at certain spots. For example, on page 110, the author talks about Boothill Graveyard. She explains how Boothill Graveyard got its name and states that 250 people are buried in the graveyard. On page 116, she repeats herself by saying the exact same thing. That's just one example out of many. However, I did enjoy hearing about all of the haunted places in America. They definitely caught my interest. My favorite one was Tombstone. Instead of just one place, it's a whole town that's haunted. Big-nosed Kate's Saloon sounds especially interesting. After reading about Ohio State Reformatory in Mansfield, OH (which isn't too far from where I live), I am hoping to visit it next year on Halloween. This is a perfect book for Halloween, with just the right amount of creepiness.

I give A Ghost Hunter's Guide to the Most Haunted Places in America: 3/5.

I received this book from the author in exchange for an honest review. I was in no way compensated for this review.
Posted by Kayla Eklund at Wednesday, October 31, 2012