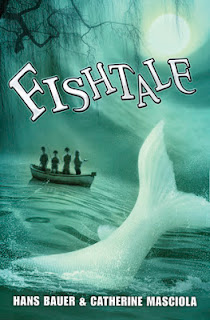 Synopsis:
Sawyer Brown's family runs a catfish farm in rural Mississippi. When his widowed mom gets sick after her wedding ring is swallowed by a pond  cat,  Sawyer is sure the missing ring is to blame. But he soon suspects that the pond cat has become the meal of a far more challenging catch. He sets out with his friends and his stowaway little sister to find the culprit that stole the ring. Journeying deep into the bayou, the foursome must band together to battle the elements, outwit a sneaky poacher, and overcome their differences in pursuit of a colossal catfish. But this is no ordinary fish. This is Ol' One Eye the biggest, oldest, smartest, and meanest durn cat that ever swam the Yazoo River! And before long, the adventurers aren't sure who's chasing who.


From the first chapter, Fishtale had me hooked. In the first chapter, the reader gets introduced to Elvira, the curator at the catfish museum. She has what she thinks is the greatest fishing story ever told. The story is about the time her, her brother, and her friends tried to catch the worlds biggest catfish, Ol’ One Eye. Also, they are trying to get back Elvira’s mom's wedding ring so she can get better. The plot was one crazy thrill ride after another. There was never a dull moment where I thought to myself ‘I should put this book down and do something fun’. Reading the book was fun. Just when the kids got into one crazy adventure that you think they aren’t going to get out of, they survive it and get into even crazier adventures. The characters were all beautifully written . My favorite character was Elvira. Even though she was with all guys, she held her own. She didn’t take any crap from the boys. Even though she was quite a bit younger than them, she became quite a valuable member to their adventure. The illustrations at the beginning of each chapter were a good idea. Not only did they give clues as to what was going to happen, but they helped to visualize the world the author created more accurately. I will definitely be reading more of the author's work in the future.

Want to know where to buy this book?
Amazon: http://www.amazon.com/Fishtale-ebook/dp/B007TX6QYA
Barnes and Noble: http://www.barnesandnoble.com/w/fishtale-hans-bauer/1108067393
Audiobooks: http://www.audiobooks.com/book/148130

I received this ARC from the publisher in exchange for na honest review. I was in no way compensated for this review.
Posted by Kayla Eklund at Sunday, December 09, 2012