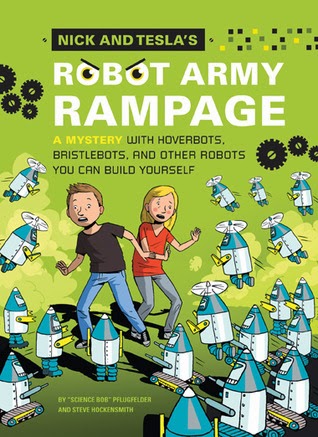 Nick and Tesla's Robot Army Rampage by  Bob Pflugfleder and Steve Hockensmith:
In this second novel of the Nick and Tesla series, the precocious brother-and-sister duo find themselves solving another baffling mystery.  As the story opens, their Uncle Newt takes a consulting gig at a cut-rate amusement park, engineering animatronic figures for a cheap Hall of Presidents knockoff.  One perk of the job is that Nick and Tesla have unlimited access to the amusement park all summer long—but the kids quickly discover that one of the park employees has a sinister plan.  They’ll have to build a few robots of their own to foil him! Readers are invited to join in the fun as each story contains instructions and blueprints for five different projects. Learning about science has never been so dangerous—or so much fun! 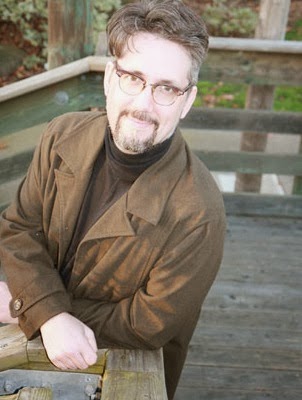 Though the town elders of Louisville, Ky., have yet to acknowledge it with so much as a single commemorative plaque, Steve Hockensmith was born in the Derby City on August 17, 1968. The first two decades of his life passed uneventfully, the only notable highlight being a short stint as an intern at People magazine, an experience that allowed Hockensmith to realize his lifelong dream -- crank calling Crispin Glover.
Despite (or perhaps because of) such lapses in his professionalism, Hockensmith became an entertainment journalist, writing about pop culture and the film industry for The Hollywood Reporter, The Chicago Tribune, Newsday and lots of magazines and newspapers you’ve never heard of. Sensing that print journalism was going the way of Raphus cucullatus, however, Hockensmith switched to an industry that he knew would offer dependable stability for decades to come: publishing.
Hockensmith is not known for his business acumen.
Nevertheless, his first novel, the Sherlockian mystery/Western Holmes on the Range, was a finalist for Edgar, Anthony, Shamus and Dilys Awards in 2007. Four sequels followed: On the Wrong Track, The Black Dove, The Crack in the Lens and World's Greatest Sleuth!.

In 2010, Hockensmith tried his hand at romzomcoms (romantic comedies with zombies) withDawn of the Dreadfuls. Though a prequel to the hit “mash-up” Pride and Prejudice and Zombies, Hockensmith’s novel was 100% original. Well, 100% new, anyway. Most of the characters and settings came courtesy of Jane Austen, who’s been a real doll about the whole thing and hasn’t complained yet. In March 2011, Hockensmith completed the PPZ trilogy (yes, it's a trilogy now) with the novel Dreadfully Ever After.
Hockensmith is launching two new series with the help of collaborators. He's writing the Nick and Tesla middle-grade mysteries with the help of gadget-building maestro "Science Bob" Pflugfelder. And The White Magic Five & Dime (due this summer from Midnight Ink) is an adult mystery with an occult twist thanks to the help of tarot reader supreme Lisa Falco. Hockensmith thinks it likely that he'll write books on his own again one day, but acknowledges that maybe now he's been spoiled by all the help.

Though he considers himself a Midwesterner at heart, Hockensmith currently lives in California’s Bay Area. He says he’s adjusted to life on the West Coast, but confesses that he still misses thunderstorms, snow and Long John Silver’s Seafood Shoppes. He shares his home with the perfect wife, the perfect daughter, the perfect son and a slightly imperfect dog.
(Taken from Steve's website).

Bob Pflugfelder:
"Science Bob" Pflugfelder has been a fan of science since he was just six years old. Over the years, he has been exploring the scientific world with thousands of students. He also encourages parents and teachers to practice "Random Acts of Science" by providing instructions and videos for interactive science experiments on his web site, as well as public presentations and workshops that help make science come alive.
Bob has been featured on television including recent appearances on Jimmy Kimmel Live, The Dr. Oz Show, and Live With Kelly & Michael. His experiments have also been featured in several magazines including People, Popular Science, Disney's Family Fun, and WIRED magazine.
Bob has spent a lot of time over the years teaching students working on movies and TV shows. He found it was a lot of work setting up labs at studios, so he purchased an ambulance and turned it into his own traveling mobile science lab! He would take it right to the movie and TV studios to teach his students. His students have included: David Gallagher, Michelle Trachtenberg, Jonathan Lipnicki, Hillary Duff, Frankie Muniz, Haley Joel Osment, Tahj Mowrey, Dylan & Cole Sprouse, and many others.
Bob continues to teach science outside of Boston while he develops experiments and videos to share with his website visitors.
(Taken from Bob's website).
~~~~~~~~~~~~~~~~~~~~~~~~~~~~~~~~~~~~~~~~~~~~~~~~~~~~~~~~~~~
GIVEAWAY!
Want to win a copy of Nick and Tesla's Robot Army Rampage? Here's what you need to do to be entered: