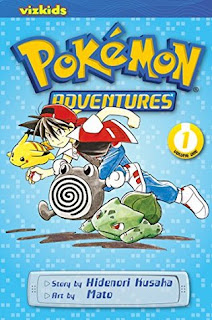 Synopsis:
Adventures based on the best-selling video games! All your favourite Pokémon game characters jump out of the screen into the pages of this action-packed manga!

Red doesn't just want to train Pokémon, he wants to be their friend too. Bulbasaur and Poliwhirl seem game. But independent Pikachu won't be so easy to win over!

And watch out for Team Rocket, Red... They only want to be your enemy!

For those of you that know me, you know I'm obsessed with Pokemon. I've loved it since I was a kid. I love the anime, the video games, the memorabilia, etc etc. Recently I found out that there is a manga called Pokemon Adventures, and read the first volume. I really enjoyed it.

Pokemon Adventures brings together everything I've always loved about Pokemon. I enjoyed watching Red discover new Pokemon, and beginning his journey as a trainer. It brought back nostalgic feelings of watching the show when I was a kid. However, the manga is unlike the show. It's similar to the video game, but there are still enough differences to make the manga unique in it's own right. I almost wish they would do a reboot of the show that is closer to the manga. I think a lot of people would enjoy it.

I thought that the first volume of Pokemon Adventures was a great start to the series. I can't wait to continue the series. As much as I loved the first volume, I wouldn't be surprised if I binge read the whole series over the next couple of weeks. I think this would be a great manga to read for someone Pokemon obsessed, or someone completely new to the series. Both would find it entertaining in different ways.
I give Pokemon Adventures volume 1: 4/5.
Want to know more about the author?
Website: https://twilog.org/k_hidenori_

I received this book from the publisher, via Edelweiss, in exchange for an honest review. I was in no way compensated for this review.
Posted by Kayla Eklund at Saturday, January 12, 2019