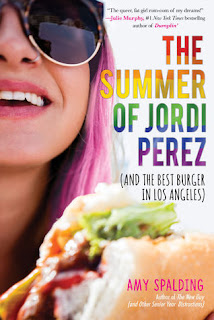 Synopsis:
Seventeen, fashion-obsessed, and gay, Abby Ives has always been content playing the sidekick in other people's lives. While her friends and sister have plunged headfirst into the world of dating and romances, Abby has stayed focused on her plus-size style blog and her dreams of taking the fashion industry by storm. When she lands a prized internship at her favorite local boutique, she’s thrilled to take her first step into her dream career. She doesn't expect to fall for her fellow intern, Jordi Perez. Abby knows it's a big no-no to fall for a colleague. She also knows that Jordi documents her whole life in photographs, while Abby would prefer to stay behind the scenes.

Then again, nothing is going as expected this summer. She's competing against the girl she's kissing to win a paid job at the boutique. She's somehow managed to befriend Jax, a lacrosse-playing bro type who needs help in a project that involves eating burgers across L.A.'s eastside. Suddenly, she doesn't feel like a sidekick. Is it possible Abby's finally in her own story?

But when Jordi's photography puts Abby in the spotlight, it feels like a betrayal, rather than a starring role. Can Abby find a way to reconcile her positive yet private sense of self with the image that other people have of her?

Is this just Abby’s summer of fashion? Or will it truly be The Summer of Jordi Perez (and the Best Burger in Los Angeles)?
(Synopsis from Goodreads).

One of my biggest regrets of 2018 was that I didn't read more queer literature. It's a genre that I love to read. However, with a lot of the new books that came out, I became immersed in fantasy, and missed a lot of the LGBTQ+ reads. It's something that I hope to change/catch up on in 2019. However, one of the few LGBTQ+ books I did get a chance was The Summer of Jordi Perez (and the Best Burger in Los Angeles. I thought it was just okay.

There are a few things that I did love about The Summer of Jordi Perez (and the Best Burger in Los Angeles). Even though I didn't approve of some of her actions, I really liked the main character, Abby. She had a fun, feisty spirit. I loved that I could relate to her because I am also a blogger. Seeing her push herself to be creative, not only in her blog, but in everything around her, made me want to be more creative with my blog. I also loved her boss, Maggie. She was always open to suggestions for what the girls wanted to do, and fun to work with. While reading the book, it felt more like she was their big sister than their boss. I wish more bosses in real life could be like that.

Even though I liked those parts of The Summer of Jordi Perez (and the Best Burger in Los Angeles), I did have quite a few problems with the book. The first problem I had was that it seemed boring, and tedious at times. There were chapters on end where it seemed like nothing important was happening. There was a lot of filler. Also, it seemed like the burger parts of the book had nothing to do with the story, other than being filler. I found myself really bored during them, and wanted to skip them so I could get back to Abby, Jordi, and what was going on at the boutique. I also didn't like the way Abby treated Jordi towards the middle of the book. There was something big that happened that could have been easily resolved by Abby communicating with Jordi, instead of being a jerk and completely ignoring/avoiding her. She treated Jordi very badly over something that I didn't think was a big deal.

All in all. I thought The Summer of Jordi Perez (and the Best Burger in Los Angeles) was just okay. There were parts that I enjoyed, but I also had a lot of issues with the book. Even though I wasn't in love with this book. I hope to at least try one of the author's other books to see if I like that better. I think a younger LGBTQ+ audience (middle grade or younger high schoolers) might enjoy this book more than I did.

I give The Summer of Jordi Perez (and the Best Burger in Los Angeles): 3.5/5.

I received this book from the publisher, via Edelweiss, in exchange for an honest review. I was in no way compensated for this review.
Posted by Kayla Eklund at Thursday, January 10, 2019