Give Death a Chance by Alan Goldsher 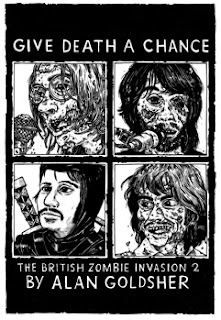 Synopsis:
It’s 2009, and Zombie John, Zombie Paul, Zombie George, and Ninja Ringo are poised to show the United States the true meaning of Beatlemania. During their first American tour since 1966, they throw down with supergenius supervillian Justin Timberlake, get abused by scantily-clad chanteuse Madonna, do some dreadful things to wannabe Zombies Noel and Liam Gallagher, possibly behead Eminem, and take on Lady Gaga’s “Little Monsters”, all in the name of climbing to the Toppermost of the Poppermost. In the hilarious, gory sequel to the critically acclaimed mashup, Paul is Undead: The British Zombie Invasion, author Alan Goldsher is the road manager and appointed scribe for the Poppermost Over America Tour, insanely crisscrossing America in a foul-smelling van packed with three short-tempered, power-mad English Zombies and one frustrated Ninja drummer. Throughout the mayhem of the brains-fueled tour, Goldsher finds out what it really means to Meet the Beatles, and answers the oft-asked question on the lips of every Fab Four fan, “What does Liverpudlian Zombie breath smell like from two inches away?”


My Thoughts:
Give Death a Chance is a short book about The Beatles being zombies and a ninja. I thought the book left many things to be desired. When reading the synopsis, I thought it was going to be interesting and funny. It had a couple of funny points, such as when The Beatles face off against Lady Gaga. For the most part, it was horribly written.It gets confusing at times because most of the language used is British slang. In fact, about sixty percent of the book is very vulgar British slang, along with quite a few f words and c words thrown into the mix.  The plot doesn't make much sense either. The zombie Beatles want to take over America by doing stupid things, such as traveling places and not playing shows, or eating fans and interrogating famous artists. At first, they reject the Scribe's common sense idea, which they have to eventually do at the end of the book anyways, and it's almost too easy. There's not an epic ending battle or anything like that. The person just gives them what they want. I almost want the time back that it took me to read this book, which was about an hour. I would not recommend this book to anyone.

I received this egalley from the publisher via Netgalley and was in no way compensated for this review.
Posted by Kayla Eklund at Thursday, April 19, 2012