The Gospel According to Twilight by Elaine Heath 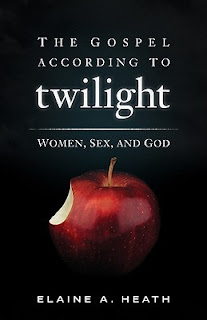 Synopsis:
The Twilight saga has become one of the most successful fiction series ever written, with more than one hundred million copies in print and several blockbuster films. Despite the tremendous commercial success Twilight has generated, few readers have analyzed its theological teachings or the messages Stephenie Meyer might be sending to women and teenage girls. This book offers both a feminist critique of Twilight and a theological review of the stories' ideas about salvation, heaven and hell, power, reconciliation, resurrection, and organized religion.

Elaine Heath writes in an accessible voice, calling attention to both the "good news" of Twilight's theology and the "bad news" of its gender stereotypes and depictions of violence against women.
The book includes questions for youth and adult groups or for classroom discussions.

My Thoughts:
The Gospel According to Twilight was an okay book. It wasn't horrible, but it wasn't wonderful either. Some of the author's statements I disagree with, such as comparing Bella to Jesus. I can kind of see the author's point of view, but I still don't agree with her. I think I would have liked the book better if I was a Twilight fan. I've read all of the Twilight series, but I just didn't really like the series. Several times throughout The Gospel According to Twilight, the author contradicts one of the points she makes in an earlier statement. I recommend this book for Twilight fans wanting a christian reference guide.

I give The Gospel According to Twilight: 2/5.

I received this egalley from the publisher via netgalley in exchange for an honest review, and was in no way compensated for this review.
Posted by Kayla Eklund at Friday, April 06, 2012