The Apocalypse Gene by Suki Michelle and Carlyle Clark 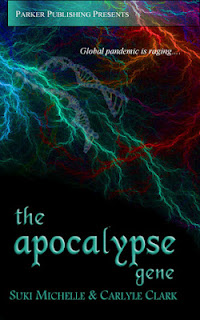 Synopsis:
Global pandemic is raging.Olivya Wright-Ono's once loving home has been converted to a hospice for the dying. Her ability to see auras forces her to witness, with agonizing detail, the vibrant colors of life consumed by malignancy.The beautiful and troubled Mikah is an elite Empath in the ancient Kindred clan, led by the brooding, ever-morphing, monster named Prime. Mikah has learned a terrible truth . . . the plague is linked to Kindred origins. When Olivya sees evidence of disease creeping into her mother's aura, she has no one to turn to but Mikah. Can he unearth the Kindred secrets and find a cure?Can she trust this boy whose power allows him to manipulate her very emotions? With her mother's life, and that of the world, in the balance, Olivya and Mikah embark on a quest to stop the Pandemic, only to discover it is far, far more than a mere disease...


My Thoughts:
The Apocalypse Gene was a great dystopian story. It had me captivated from beginning to end. The plot was very original, which I loved. Cancer turns into a pandemic and wipes out a good majority of the population. The cancer turns out to be alien like creatures called Adversarii which want to take over the world. The book got a little confusing for me at times. The most confusing thing about it was all of the slang that the characters used. It was incredibly hard for me to figure out what some of the characters, especially Ayvilo, were talking about sometimes. I all of the characters, with the exception of Hakim. I didn't like his attitude or personality. My favorite character was Lylobriel. His back story was very interesting. I also liked his wisdom and how he helped out Mikah and Olivya I will definitely be reading more of each author's work in the future. I recommend this book for fans of dystopian and science fiction books.


Want to know where to buy this book?

I received this book from the author in exchange for an honest review, and was in no way compensated for this review.
Posted by Kayla Eklund at Tuesday, May 29, 2012