The Witch Awakening by Karen Nilsen 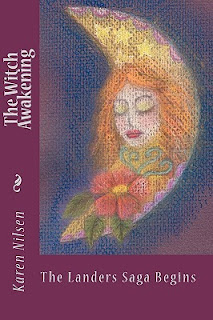 Synopsis:
Book One of the Landers SagaThe odor of burning flesh and the screams of those condemned to the flames disturb the dreams of young Safire of Long Marsh. Safire struggles to keep the curse of her psychic abilities secret, lest she be burned at the stake as a witch in her native land Cormalen. Forced to keep her talents hidden instead of learning how to use them, Safire is ill-prepared to face the evil that awaits her. When she meets the rebellious Merius of Landers, a nobleman determined to escape his overbearing father's influence, she finally finds someone who accepts her. But their romance interferes with court plots and family duty and ultimately leads Safire to confront the dark secrets of the House of Landers alone. What she discovers there proves to be a test of her unusual gifts, a test that could free the soul of a haunted man--or end in her death.


My Thoughts:
The Witch Awakening was an okay book. The beginning started off slow until about page 150. Afffter that, the book got better. I liked most of the characters. Arelia confused me a little bit. Sometimes Mordic could see her and other times he had to touch Safire to see her. My favorite character was Safire. I liked her personality and her fiery attitude. She didn't take any crap from anyone. At first, I really liked Merius, but towards the end of the book he started acting like a jerk. Dagmar gave a few hints that Merius had a horrible temper and that Safire shouldn't be with him. Due to that, I'm not entirely sure if I trust Merius anymore. The ending wasn't really a cliffhanger. Although the book is the beginning of a series, you could read it as a stand alone novel. The plot taught me about politics in the past. I recommend this book to fans of supernatural stories.

I received this book from the author in exchange for an honest review, and was in no way compensated for this review.
Posted by Kayla Eklund at Sunday, May 27, 2012