Hearts of Darkness by Kira Brady 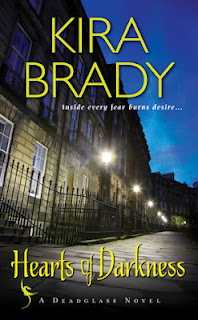 Synopsis:
In the first of a dazzling new romantic trilogy, one woman’s courageous search plunges her into a millennia-old supernatural war—and an irresistible passion…Nurse Kayla Friday has dedicated her life to science and reason. But for her, Seattle is a place of eerie loss and fragmented, frightening memories. And now the only clue to her sister’s murder reveals a secret battle between two ancient mythologies…and puts Kayla in the sights of lethally-sexy werewolf mercenary Hart. He’ll do whatever it takes to obtain the key to the Gate of the Land of the Dead and free what’s left of his soul. But seducing the determined Kayla is putting them at the mercy of powerful desires neither can control. And as the clock ticks down to hellish catastrophe, the untested bond between Kayla and Hart may lead to the ultimate sacrifice.

My Thoughts:
Hearts of Darkness started off really slow for me. In fact, it was almost a DNF because the first chapter was so excruciatingly slow. However, I am glad I stuck it out and finished the book. It had me on the edge of my seat wondering about what was going to happen next. Almost all of the plot twists were a complete shock to me. I predicted none of them before they happened. The book had a couple of sex scenes but nothing overly smutty. It didn't make me uncomfortable. I liked that the final battle lasted for about 50+ pages. It didn't end in one chapter. A lot of the books I have been recently the last battle has ended in one chapter or just a few pages. Hearts of Darkness was a refreshing change of pace. I ended up liking all of the characters when I was done with it. Throughout the book I hated Norgard. I hoped that he died in a fiery inferno. However, when I was done with the book, I felt a lot of pity and sympathy for him. He was still a jerk, but he was a jerk who able to feel human emotions, such as love. Kira Brady wrote a great debut novel. I am so glad I stuck with it. I can't wait to read the next book when it is released.

I received this book from the author in exchange for an honest review. I was in no way compensated for this review.
Posted by Kayla Eklund at Monday, September 10, 2012