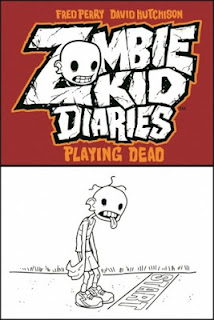 Synopsis:
Middle school is horrific enough for any 5th grader's first day. But for Bill Dookes, it's a festering, rotting, undead nightmare! Since Bill's deadbeat dad got arrested trying to burn the house down for the insurance, Mom's had to make ends meet by volunteering to various medical research companies for cash. This would be fine if she hadn't brought home a mysterious zombie virus! Now Bill has to deal with skin problems and body chemistry changes that make puberty look like a walk in the park! And then there's his ever-growing appetite for BRAINS!

Zombie Kid Diaries: Playing Dead is a decently good childrens novel. The book is classified as a middle grade novel, but I would reccomend it for fourth grade or higher. Zombie Kid Diaries: Playing Dead is about a kid named Bill who would like to be a professional video game player when he gets older. Bill's mom gets paid to take experimental drugs from various medical companies. One night she comes home and is very sluggish. Eventually she turns into a zombie. Somehow Bill turns into one as well. It's never explained how or why Bill and his mom turned into zombies. It's one of the biggest plot holes in the books, and bothers me. There were quite a few plot holes in the book. I liked all of the characters except for Bill's mom. She was a very irresponsible woman. She took these trial drugs and would be incoherent so Bill would not only have to fend for himself, but do everything for her as well. She wasn't a good role model. The book was funny and made me laugh a few times. I reccomend it to kids in grades 4-8.

Want to know where to buy this book?
Amazon: http://www.amazon.com/Zombie-Kid-Diaries-Volume-Playing/dp/0985092548
Barnes and Noble: http://www.barnesandnoble.com/w/zombie-kid-diaries-volume-1-fred-perry/1112652118

I received this book from the publisher via Netgalley in exchange for an honest review. I was in no way compensated for this review.