Blog Tour: The Tragedy of Knowledge by Rachael Wade 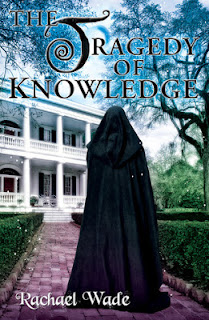 Synopsis:
The Battle Comes Home.After arranging a hopeful but risky alliance during their visit to the Amaranthian realm, Camille, Gavin, and the resistance don’t have much time to recover from their failed mission. Forced to create a new strategy to achieve their goal, they embark on a different mission—one that possibly holds the missing key to their quest for victory, and their deadliest one yet.As they attempt round two to restore peace and freedom for their kind, they must rely on help from the living, the bayous, and beyond to decipher allies from enemies, good magic from bad, and whether the source claiming to lead the way to their destiny can be trusted. Racing against the clock to solve the mystery of their fate, they find the battle has come right to their doorstep, and this time, everyone must pay a price.

My Thoughts:
Once again, Rachael Wade has written a brilliant novel. The Tragedy of Knowledge was a great conclusion to the Amaranth series. The book picks up where The Gates left off. The main characters, Camille and Gavin, along with the rest of the gang need to try to find a way to destroy Samira and Gerard and the vampire curse. This is my favorite book in the series. The plot was very intricate.It made me laugh at times, and was heartbreaking at others. I was upset when a certain character died. The character was a minor character, but their death still left a big impact on me because o the emotional way it was written. I only found one mistake in the book. The characters were all the same characters we know and love with the addition of Gerard. I don't really care for Gerard. The reader can tell he was well written because he creeped me out and left me with chills long after I finished the book. The ending of the book was heartbreaking. However, it was a wonderful ending that tied everything up at the end. Anything else wouldn't have worked as well. The Amaranth series will always hold a place in my heart, long after the series is finished. It will definitely be something I re-read many times. Thank you Rachael Wade for creating a magical world for me to get lost in time and time again.

I give The Tragedy of Knowledge: 5/5.

Make sure to keep an eye out at Kayla's Reads and Reviews facebook page, for a chance to win bookmarks autographed by Rachael Wade.

I received this book from the author in exchange for an honest review. I was in no way compensated for this review.
Posted by Kayla Eklund at Tuesday, November 06, 2012