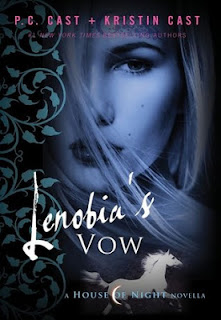 Synopsis:
The second in the enthralling new mini-series of novellas from the #1 bestselling authors of the House of Night, Lenobia's Vow tells the gripping story behind the House of Night's enigmatic riding instructor – and one of Zoey’s closest allies against evil

The House of Night is an international publishing sensation; with almost 12 million books in print, and an incredible 120 weeks on the New York Times bestseller list, the series has taken the world by storm. Now, the excitement continues as the Cast mother-daughter duo shares the back stories of a few of the House of Night's most important – and mysterious – characters. The second of the House of Night Novellas brings us Lenobia, the strong, beautiful horseback riding instructor, who guides Zoey through some of her darkest hours, and has a dark secret buried in her own past...
In a small southern town at the turn of the century, young Lenobia is developing into a beautiful young woman with ideas of her own. But when she is Marked as a fledgling vampyre, her world turns upside down, and she is drawn to the musical streets of New Orleans. There, she learns of the city’s dark underbelly, ruled by powerful black magic. As Lenobia experiences her first love – and loss – and discovers a passion for horses to sustain her, she must come face-to-face with Darkness itself. And she may not escape without scars.

My Thoughts:
For all of those who have followed my reviews since I have starting blogging, you know I am not a big fan of the House of Night series. The first four books were great. After that, the plot and writing style just keep getting worse and worse. The novellas are no exception to this. I was definitely interested to hear more about Lenobia’s back-story because she is one of my favorite characters. However, I was disappointed. The plot didn’t really hold my interest at all. The only reason I even finished reading the book was because the story was so short. The plot went from boring to confusing when The Bishop became involved. He would have been a great antagonist had he been better written. As it was, I am not sure if he was vampyre with an affinity for fire or just some creepy old dude with super powers. I often wonder why I still waste my time reading this series. I guess I will suffer through until the end of the series, which is only a couple books away. Either that or until I get horribly fed up with it.
I give Lenobia’s Vow: 1/5.

I borrowed this book from the library. I was in no way compensated for this review.
Posted by Kayla Eklund at Tuesday, November 27, 2012