A New Dawn by Various Authors 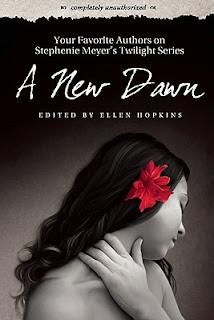 Synopsis:
*Is Edward a romantic or a (really hot) sociopath?* How is the Twilight series just like one of Shakespeare's tragedies?* Who would you rather date: the guy who thirsts for your blood, or the guy who drinks out of the toilet?You can't read Stephenie Meyer's Twilight series without wanting more- more romance, more suspense, just more of Bella, Edward, Jacob, and the rest of Forks, Washington. You aren't alone.Join some of your favorite writers as they look at the series with fresh eyes, and fall in love with Bella and Edward, and their world, all over again.Find out:* How the literary vampire went from horror show to heartthrob* Other Native American wolf myths, and how the Quileute werewolves compare* What Bella and Edward's romance has to say about free will* Why vampires and werewolves really shouldn't date, and what that has to do with Edward's insistence that Bella go to promWith Essays From...* Robin Brande* Rachel Caine* Cassandra Clare* Rosemary Clement-Moore* Linda Gerber* Cara Lockwood* Megan McCafferty* K. A. Nuzum* James Owen* Janette Rallison* Ellen Steiber* Anne Usru


A New Dawn was an interesting take on the Twilight phenomena. I really liked that the introduction was done by Ellen Hopkins. She is one of my favorite authors. I really admire her and value her opinion. While I don’t see this book becoming a best seller, I think Twilight fans will want to read it. I recommend getting it from the library, unless you are a diehard Twilight fan and have to have it because it has Twilight on it. I have found out in the last few months that I enjoy Smart Pop books. I hope they publish more. In Linda Gerber’s essay, she teaches about wolf history, which I thought was really interesting. I learned several things that I never would have known otherwise. K.A. Nuzum brought up an interesting point in her essay The Heartache Monster. Edward is a vampire, so he could do destructive things to his body such as smoke and drink without any negative consequences. I know that seems obvious, but Edward is such a moral person that most people don’t think about him doing things like that. I was also excited that Cassandra Claire wrote an essay for A New Dawn. She is another one of my favorite authors. I liked A New Dawn but I wasn’t absolutely blown away by it.

I received this book from the publisher via Netgalley in exchange for an honest review. I was in no way compensated for this review.