Seth's review of Rise and Fall by Joshua P. Simon 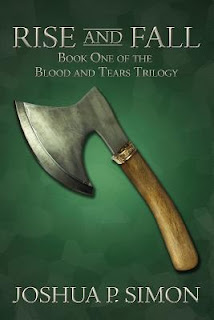 Synopsis:
An ill-prepared queen, a soft-hearted mercenary, and a crippled warrior struggle as a kingdom falls and an empire rises.For years the High Mages of Cadonia have maintained an uneasy peace among the nobles disgruntled with the rule of the king. In the aftermath of a tragic event, Elyse, the king’s daughter, is thrust into a role she is not ready for. As queen, she must now determine who to trust while struggling to keep the kingdom from collapsing around her.The Hell Patrol, a legendary mercenary outfit commanded by Jonrell, finds itself disenfranchised with their current employer. Recalling a promise he made over a decade ago, Jonrell breaks his contract in order to right the wrongs of his past. On the continent of Hesh, the Blue Island Clan has long been ignored by its neighbors. Tobin, a warrior and son of the Clan’s ruler, struggles as an outcast as he watches his brother Kaz lead his father’s army to glory. Emboldened by a new friendship with a mysterious shaman, Tobin finds himself gaining the respect he always wanted. An epic fantasy tale, Rise and Fall is the first book in the Blood and Tears Trilogy.

Yes, I have felt that I may have read something similar to this in the past, but I don't recall exactly what it was that tickled my memory. It may have been the tricky magician or the warrior. But, nagging memories put aside, I loved this book. The story jumping back and forth between several perspectives might be a little much for some, but I love stories that bring several different stories together for a final product of awesomeness. The viciousness and callousness of the one character mixed in with the amazing leadership of the other along with the reform of the vicious one makes for an awesome read. Plenty of intrigue to keep you interested in reading just one more chapter.

I received this book from the author in exchange for an honest review. Neither Seth nor I were compensated in anyway for this review.
Posted by Kayla Eklund at Tuesday, January 01, 2013