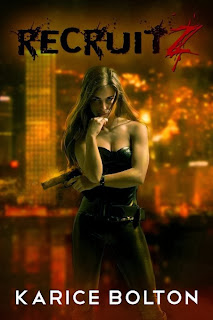 RecruitZ blurb: Scientists are the new rock stars. The infection has been contained for several months, and the world is celebrating. But humans are still dying. Rebekah Taylor has seen it firsthand. Her husband was killed right in front of her by the very creatures that humans were told they no longer had to fear.

Rebekah is determined to find out who is responsible for the death of her husband and the obvious cover-up. Fueled with revenge, she begins to find answers that lead to one frightening conclusion. The apocalypse might be over, but the battles are just beginning. 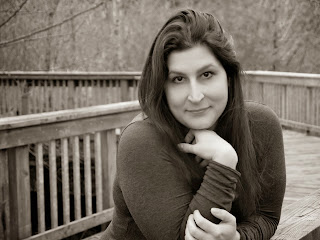 Karice lives in Washington with her wonderful husband, who also happens to be her high school sweetheart and their two cute English bulldogs! She enjoys reading, baking, and trying to be crafty on her off-hours. She's also a coffee, tea, and snow addict. If she could live somewhere that had the white stuff year-round, she probably would. She also loves chatting with her readers on Facebook!

Beyond Love Series (Beyond Control, Beyond Doubt, Beyond Reason)

“Babe, whatever happens…”
“Knock it off,” I said.
“We have nothing to fight them with, and a horde this size needs a distraction.”
“Don’t you dare,” I hissed, shaking my head. The fear was pulsing through me at an unstoppable rate. “We didn’t live through the outbreak to die now.”
I gritted my teeth, grabbed the civilian anti-zombie kit from under my seat, unzipped it, and looked for anything inside that might help. We were instructed to drop these kits off at government collection stations. I was grateful we never got around to it.
Gavin held down the ignition and reverse buttons at the same time in a vain attempt to override the safety sensors.
“Damn it,” he muttered.
“Try rebooting the car. Turn it off and take the key out. Give it a few seconds and slip the key back in. Maybe if you pop it in reverse before the car can sense the zombies, it’ll let us reverse,” I directed.
He nodded, biting his lip, and turned off the engine allowing the moans of the horde outside to be heard. I took a deep breath and looked out my window that was now completely blocked by tattered shirts and non-oozing wounds pressed against the glass. It would only be a matter of time before they began to break through the glass. The moans turned into a chorus of humming.
“One-Mississippi-two…” Gavin’s words wrapped around me.
I prayed silently to the same God I’d prayed to many nights before. He listened then and I hoped he’d listen now.
I grabbed two knives that were in the kit and flipped the blades open, locking them in place. The anodized orange handles were larger than the actual blades. Not comforting. I handed one to Gavin.
“There’s still a Louisville Slugger on the floor behind us,” Gavin said. His brown hair was cut short. That was one of the first things he did after we were vaccinated. A haircut and a shave to celebrate our survival. He still looked young but not as young as we both did before the outbreak.
I slid toward the center console, crawling as far from the passenger window as I could get. Gavin’s breathing was heavy, and I felt the heat rolling off him as he continued to struggle with what we were facing.
I dug around in the bottom of the bag for the zombie deterrent. My hand clasped around the ADD, also known as the Audible Distraction Device, and I dropped the kit to the floor.
The car rocked back and forth as the number of beasts grew on both sides, creating a trance-like rhythm that was terrifying.
“Grab the bat,” Gavin instructed, his voice low.
I slid my hand to his knee, squeezing it hard before I reached behind us and grabbed the wooden weapon.
The challenges we faced living off the land paled in comparison to what we faced confined in this car.
Gavin turned the engine on and sunk it into reverse, only to be stalled right where we were.
~~~~~~~~~~~~~~~~~~~~~~~~~~~~~~~~~~~~~~~~~~~~~~~~~~~~~~~~~~~~~~~~~~~~~~~~

a Rafflecopter giveaway
Posted by Kayla Eklund at Monday, January 20, 2014