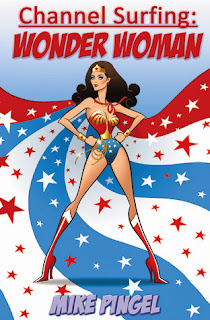 Synopsis:
Author Mike Pingel wraps himself with the lasso of truth to uncover everything about TV's Wonder Woman! Take a "spin" back to the seventies with the hit TV show and superhero Wonder Woman which starred the beautiful Lynda Carter. Learn everything you ever wanted to know about the show's history and costume design. Channel Surfing: Wonder Woman includes the very first-ever complete TV series Wonder Woman episode guide. It looks at all sixty episodes of the series. The guide uncovers little known episode tips, celebrity guest stars and Wonder Woman's super toys! Includes a all-new interview with Lynda Carter. Plus interviews with: Show producer Douglas S. Cramer and actors S. Pearl Sharp, Stella Stevens, Joan Van Ark, and Clark Brandon.

Channel Surfing: Wonder Woman was a fun read. It teaches the reader anything they want to know about the Wonder Woman television show from the seventies. It also features Lynda Carter, and follows her career after Wonder Woman. I was hoping that the book would also do a feature on the Justice League of America that I used to watch as a child. While it did mention the show once, there wasn't as much of it as I had hoped in the book.

Other than that, I had one problem with this book. The editing was terrible. Normally I wouldn't mind a few mistakes. However, Channel Surfing had so many spelling, grammar, and punctuation mistakes that it was hard to read and comprehend at times. Sometimes words were left out of sentences, which made it even more confusing. The book would have gotten five stars from me if it would have had a better editor.

I received this book from the author in exchange for an honest review. I was in no way compensated for this review.
Posted by Kayla Eklund at Wednesday, January 01, 2014