Diary of a Part-Time Ghost by Vered Ehsani 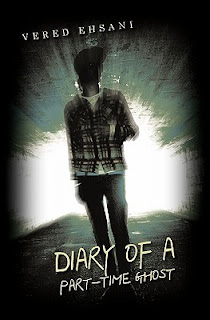 Synopsis:
In the first book of the ‘Ghost & Shadows’ series, fifteen-year old Ash wants nothing more than to be a normal kid and avoid trouble. And then his birthday gift transforms him into a ghost and zaps him back in time to the beginning of the American Revolution. If he thought that was bad, it’s about to get a whole lot worse. Armed only with an ancient history book and the quirky advice of an annoying mentor, Ash must rescue his ancestor from one danger after another, including an implacable enemy who controls the very shadows. What starts out as a brief experiment in time travel rapidly changes into a race for his very survival, and Ash is running out of time. Despite his efforts to stay out of trouble, Ash finds plenty of it as he must decide what his role will be in the shifting balance of forces. As he moves through one shadow- plagued adventure after another, Ash gradually discovers that true power lives in the most unexpected place: himself. Humorous and action-packed, Diary of a Part-Time Ghost will hold readers in its grip from the first sentence to the last.
(Synopsis taken from Goodreads.)

Dairy of a Part-Time Ghost was a bit confusing at times, but otherwise it was a good read. The yellow eyed man, Kali, confused me quite a bit. I'm not sure when Ash's mom let someone in the house, if it was Kali, his reflection, or something else entirely that was also evil and looking for the book. Also, the veil confused me a little bit. Ash was told not to bring Kali in the veil, but when he did, nothing happened other than Kali's true self was revealed. Hopefully the second book in the series will clear everything up and have quite a bit of answers. Other than the confusing parts, the book was written decently well. The plot kept me turning pages, wondering how Ash was going to get Sara and Samuel back to their father, and what type of trouble the group was going to come across next. I liked how the author used bits and pieces of actual history in the plot, such as The Boston Tea Party. The book taught me a few things I didn't know and had me looking up things online because I wanted to learn more. I liked almost all of the characters. The only character I didn't like was Ash's mom. I thought she was very naive, not noticing all that was going on around her. My favorite character was East Wind. I liked his sense of humor, and how he seemed extremely intelligent. I think he knew more about Ash and his ghost like abilities than what he acted like he knew. Throughout the book, the author includes parenthesis to state things that I thought were obvious already and didn't need to be said, which annoyed me a little bit while reading. This book was a decently good YA novel. I recommend it for fans of historical fiction and ghost stories.

I received this book from the author in exchange for an honest review, and was in no way compensated for this review.
Posted by Kayla Eklund at Saturday, March 03, 2012