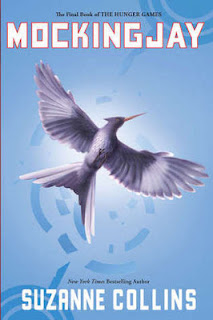 Synopsis:
Against all odds, Katniss Everdeen has survived the Hunger Games twice. But now that she's made it out of the bloody arena alive, she's still not safe. The Capitol is angry. The Capitol wants revenge. Who do they think should pay for the unrest? Katniss. And what's worse, President Snow has made it clear that no one else is safe either. Not Katniss's family, not her friends, not the people of District 12. Powerful and haunting, this thrilling final installment of Suzanne Collins's groundbreaking The Hunger Games trilogy promises to be one of the most talked about books of the year.
(Synopsis taken from Amazon.)

My Thoughts:
I read this for the 2012 ebook challenge. Mockingjay is a superb finale to The Hunger Games trilogy. However, the book wasn't as good as the first two in the series. There was a few character deaths, but the way they died seemed very anti-climatic. I was expecting Katniss to be hurt a lot more over the person getting mauled by the muttations, but it didn't seem to bother her as much as I thought it would. Out of the new characters, I liked Boggs the best. The character I hated the most in Mockingjay surprisingly wasn't President Snow. I actually began to like him towards the end of the book. The character I hated the most was Coin. I disliked her attitude, the way she used Katniss, and what she wanted to do towards the end of the book. The plot had a lot of crazy twists and turns, but not as many as the previous books in the series. A lot of the plot twists in this book made me so mad I wanted to throw my Kindle when I was reading. Am I the only one that hopes Suzanne Collins writes a spin-off series about Katniss children with the man she chose? I thought the ending of the book was good, but it had so much more potential. Mockingjay was an incredible book, but it fell short of what I was expecting.

I bought this book for my Kindle and was in no way compensated for this review.
Posted by Kayla Eklund at Thursday, March 22, 2012