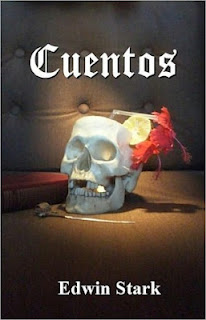 Synopsis:
A doomed vampire hunter. A kid trapped in the sewers with an undead thing. A town that could be yours… but hides a terrible, dark secret. A scary cosmic balance. A dead brother and his revenge beyond the grave. An unspeakable future and three eerie girls: all these elements lurk within Cuentos, this collection of eight short stories and two short novellas that may make you reconsider how you contemplate darkness… after you’re finished reading it.Four of these tales are science fiction bordering the scary.

Kayla's review of Vampire and Plain Terror sections:
At first, I thought Cuentos was going to start out as a young adult short story book. Wow, was I wrong! The first story about the boy collecting cans seems like it could be read by older teens, but the rest of the stories are really graphic.One of the stories involves rape, but doesn't go into much detail. I liked most of the vampire stories. The one about the boy on his way to school had me very confused as to why it was in the vampire section. As far as I could tell, there were no vampires in the story. The plain terror section was pretty graphic and a little too much for my weak stomach, especially the second story. Although that would be my fault for reading it. The author states at the beginning of the plain terror section that if don't like gore, or have a weak stomach, to skip the story. The sad thing about the second story is that hate crimes still happen like that in different countries around the world. I loved how all of the stories tied together at the end, and you began to understand the characters a lot better. I can't wait to read more of the author's work in the future.

Seth's review of the Science Fiction section:
Cuentos had a few things I didn't like in it. The first, and most notable is that the grammar and spelling need a lot of work. The stories took me longer to read because in some parts I had to read a paragraph several times or it to make sense. The second is that the author wrote a lot of polygamist relationships in the stories. In two out of three sci-fi stories, there are two examples of men with three women. It makes the story seem a little tacky. The stories themselves were okay. They would have been better if they would have had an editor.

I received this book from the author in exchange for an honest review, and was in no way compensated for this review.
Posted by Kayla Eklund at Thursday, March 22, 2012