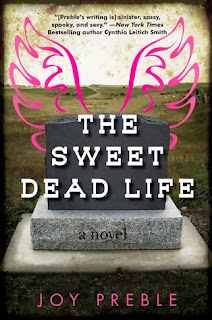 Synopsis:
“I found out two things today. One, I think I’m dying. And two, my brother is a perv.”So begins the diary of 14-year-old Jenna Samuels, who is having a very bad eighth-grade year. Her single mother spends all day in bed. Dad vanished when she was eight. Her 16-year-old brother, Casey, tries to hold together what’s left of the family by working two after-school jobs— difficult, as he’s stoned all the time. To make matters worse, Jenna is sick. When she collapses one day, Casey tries to race her to the hospital in their beat-up Prius and crashes instead.Jenna wakes up in the ER to find Casey beside her. Beatified. Literally. The flab and zits? Gone. Before long, Jenna figures out that Casey didn’t survive the accident at all. He’s an “A-word.” (She can’t bring herself to utter the truth.) Soon they discover that Jenna isn’t just dying: she’s being poisoned. And Casey has been sent back to help solve the mystery that not only holds the key to her survival, but also to their mother’s mysterious depression and father’s disappearance.

At first, The Sweet Dead Life started off slow for me. The first 100 pages felt like I was trudging through mud as I was trying to finish it. I almost marked the book as a DNF. However, I’m glad I finished it. After those pages, the plot picks up quickly. I couldn’t put the book down. After Jenna finds out about Casey being an A-word and the repercussions of that, the book got a lot better. At first I couldn’t stand Amber, the EMT. I thought she was suspicious. Also, she was extremely bitchy. However, as the book went on, I began to enjoy her. Jenna was my favorite character. I liked her sense of humor. It was very witty and cynical. I had hoped that the book would have a happier ending. The ending was a little confusing. I will definitely be checking out Joy Preble’s books from my library sometime soon. I just found out that The Sweet Dead Life is going to have a sequel, The A-word. I am ecstatic to read it.

I received this ARC from the publisher, Soho Teen, in exchange for an honest review. I was in no way compensated for this review.
Posted by Kayla Eklund at Saturday, October 26, 2013