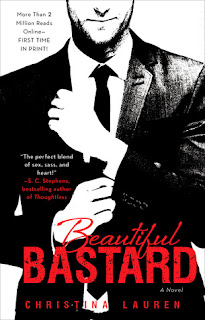 Synopsis:
An ambitious intern. A perfectionist executive. And a whole lot of name calling. Whip-smart, hardworking, and on her way to an MBA, Chloe Mills has only one problem: her boss, Bennett Ryan. He's exacting, blunt, inconsiderate--and completely irresistible. A Beautiful Bastard.Bennett has returned to Chicago from France to take a vital role in his family's massive media business. He never expected that the assistant who'd been helping him from abroad was the gorgeous, innocently provocative--completely infuriating--creature he now has to see every day. Despite the rumors, he's never been one for a workplace hookup. But Chloe's so tempting he's willing to bend the rules--or outright smash them--if it means he can have her. All over the office. As their appetites for one another increase to a breaking point, Bennett and Chloe must decide exactly what they're willing to lose in order to win each other.Originally only available online as The Office by tby789--and garnering over 2 million reads on fanfiction sites--Beautiful Bastard has been extensively updated for re-release.

My Thoughts:
Beautiful Bastard was the first erotica novel that I have ever read. Normally, books with a lot of sex scenes make me uncomfortable while reading them. That wasn't the case with Beautiful Bastard. It was written very well. The words almost flowed off the page.The sex scenes were descriptive and interesting. The authors switched it up, so it wasn't the same boring position and place every time. Even though the sex scenes were fun, they didn't overshadow the story, for which I was grateful. The book still had an intriguing plot. It was great to watch Bennett and Chloe's relationship evolve and to figure out how they were going to overcome their struggles. At the beginning of the book, I hated both Bennett and Chloe. After the first sex scene, I just hated Bennett. I thought he was a pompous ass. However, as the story progressed, I realized why he acted the way he did, and didn't hate him as much. There was still a few points in the book where I wanted to strangle him. By the end of the book, I loved both Chloe and Bennett. I wanted more of their story. I am disappointed that they won't be main characters in the rest of the series.

I give Beautiful Bastard: 4/5.

I received this book from the publisher via Edelweiss in exchange for an honest review. I was in no way compensated for this review.
Posted by Kayla Eklund at Monday, December 30, 2013