Seth's review of Steel and Sorrow by Joshua P. Simon 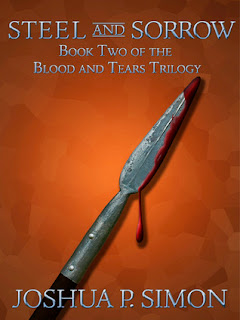 Synopsis:
A Warleader proves his worth, a High Mage seeks revenge, a Commander overcomes his past, and a Queen solidifies her rule.On the continent of Hesh, Tobin has finally gained the two things that have always been out of his reach—the respect of his clan and a woman’s love. He now seeks to finish what his father began. When Tobin faces an enemy he never knew to suspect, he is left questioning not only his ability to rule, but also his sanity. A High Mage has been humbled, but he has not been defeated. After spending his time devouring the history of Hesh, he’s discovered a way to return home and reclaim what was once his. But before he exacts revenge on his enemies, he fulfills an obligation to his one remaining friend. In the aftermath of great tragedy, Kaz has taken the role of commander, and with it, a mountain of headaches. He expected threats from his enemies. He did not expect the largest headaches to come from within his own ranks. To make matters worse, the faded memories of Kaz’s previous life are returning and what he sees haunts him. Queen Elyse’s kingdom faces collapse at the hands of a civil war. While her army has been organizing to secure the crown against traitorous lords, she has worked at her role as queen. Suspicion of traitors among the ranks of her council threatens to undermine Elyse's authority when a chance for peace presents itself. A year after the events of Rise and Fall, Steel and Sorrow is the second book in the Blood and Tears Trilogy. A free three chapter excerpt of Walk Through Fire: A Blood and Tears Prequel Novella is included.


First off, let me apologize to the author Joshua for how long it has taken me to getting around to typing this review. I finished it shortly after receiving it a year ago. I just get really long periods of not wanting to write anything. I thoroughly enjoyed it from front to back and read it in I want to say less than ten hours time. For me that’s speed reading. The details are a bit fuzzy about the story as I’m writing it but they are coming back to me. I’m looking through the book so I don’t get the names wrong or potentially spoil some important plot point inadvertently.

After a bit of conniving and two timing in the prologue, we pick up with Kaz once again in his band of men he now leads. I don’t know what it is but I love watching his continued transformation from brutal killer to running his mercenary group turned Queen’s guard. It’s one of the reasons that I love reading this trilogy. On the flip side, it’s also interesting reading about his brother Tobin going from the underdog to being the ruthless leader of his nation. It’s like watching white turning to black and black turning to white. Yin and Yang as it were. Watching the steady transformation of the evil man to good and the once good man to evil fascinates me.

The story doesn’t plod along in the least. There’s one confrontation after another as the story swaps back and forth between the two brothers. Sometimes, one brother deals with politics while the other deals with war and vice versa. Never a dull moment for long. As the story progresses, the two are inexorably drawn closer and closer together via forces beyond one another’s control. I can’t wait to read the third book if Joshua is willing to be patient in me writing another review. If not I do understand. I urge anyone reading this who loves medieval action and magic to pick this book up, if not the whole trilogy, as a gift to themselves. If you own a Kindle I doubly urge you to pick it up as you’ll receive an amazing deal for this great trilogy. You can get the whole trilogy for less than the cost of a few Machiottos at Starbucks.

Seth received this book from the author in exchange for an honest review. Neither Seth nor I were compensated in any way for this review.