Sex in the Title by Zack Love excerpt 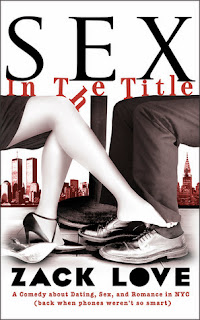 New York City, May 2000. The Internet bubble has burst, and Evan's boss fires him with an email. The next day, his girlfriend dumps him, also via email. Afraid to check any more emails, Evan desperately seeks a rebound romance but the catastrophes that ensue go from bad to hilariously worse. Fortunately, Evan meets someone whose legendary disasters with females eclipse even his own.

To reverse their fortunes, they recruit their friends into a group of five guys who take on Manhattan in pursuit of dates, sex, and adventure. With musings about life, relationships, and human psychology, this quintessential New York story about the search for happiness follows five men on their comical paths to trouble, self-discovery, and love.

Zack Love graduated from Harvard College, where he tried to create a bachelor’s degree in Women. With the bachelor portion of that degree in hand, he settled in New York City but – to afford renting his bed-sized studio – found himself flirting mostly with a computer screen and stacks of documents. Determined not to die a corporate drone, Zack decided to sacrifice sleep for screenwriting, an active social life, and Internet startups offering temporary billion-dollar fantasies.

To feed his steady diet of NYC nightlife, he regularly crashed VIP parties in the early 2000s and twice bumped into his burgeoning crush, a Hollywood starlet. But – much to Zack’s surprise – neither of those awkward conversations led to marriage with the A-list actress. Zack eventually consoled himself by imagining fiascoes far worse than those involving his celebrity crush. In the process, he dreamed up a motley gang of five men inspired by some of his college friends and quirky work colleagues. And thus was born Sex in the Title. But the novel is not autobiographical: Zack never had his third leg attacked by any mammal (nor by any plant, for that matter). In fact, keeping his member safe has been one of Zack’s lifelong goals – and one of the few that he’s managed to accomplish.

Twitter: @ZackLoveAuthor
~~~~~~~~~~~~~~~~~~~~~~~~~~~~~~~~~~~~~~~~~~~~~~~~~~~~~~~~~~~~~~~~~~~~~~~
EXCERPT
“So what’s the body count?”
“The body count?”
“You know: how many women have you slept with in your twenty-nine years?”
Evan wasn’t sure whether to overstate the number to look sexually impressive to a soft porn star, or whether to understate the number to look less promiscuous and more like the responsible, clean cut, solid-boyfriend type. Since he still hadn’t quite figured out what Tina was looking for or who she really was, he decided just to tell the truth.
“I’ve been with about sixty-seven women.”
“What do you mean ‘about sixty-seven?’ You say ‘about sixty’ or ‘about seventy.’ But not ‘about sixty-seven.’ You’re obviously keeping track.” Tina looked amused at another opportunity to toy with Evan.
“All right. You got me,” Evan conceded. “I’ve been with precisely sixty-seven women.”
“Unless, of course, you said ‘about’ because the total depends on how you define ‘being with a woman.’ For example, if you just got a blowjob and nothing else then maybe you don’t count that.”
“OK. To be more precise, I’ve had sexual intercourse with sixty-seven women.”
“All right, so then you’ve probably been with many more women than sixty-seven?”
“Yeah. But I don’t keep track of those.” Evan suddenly wondered why he didn’t bother to keep track of anything but consummation.
“I see…So when did you get started on these sixty-seven women?”
“You mean, how old was I when I lost my virginity?”
“Yes.”
“Twenty.”
“So you’ve slept with sixty-seven women in just nine years.”
“Well, actually I’ve had six serious relationships that together took up about two years.”
“Serious? Let’s see…Six serious relationships in two years…So each one lasted an average of four months. You call that serious?”
“Well, it was an intense four months. And I wasn’t seeing anyone else. You know, that’s kind of a big deal in New York,” he added ironically. “Dating someone exclusively for four months in New York is like four years in Anchorage.”
Tina chuckled at Evan’s joke. “All right, so not counting the serious relationships, you’ve slept with...” She crunched some numbers in her head. “You’ve slept with sixty-one women in just seven years…That’s an average of almost nine per year…A new woman every forty days.” Tina seemed impressed, which suddenly made Evan feel rather promiscuous.
Posted by Kayla Eklund at Sunday, December 29, 2013