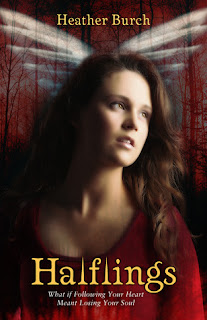 Synopsis:
After being inexplicably targeted by an evil intent on harming her at any cost, seventeen-year-old Nikki finds herself under the watchful guardianship of three mysterious young men who call themselves halflings. Sworn to defend her, misfits Mace, Raven, and Vine battle to keep Nikki safe while hiding their deepest secret—and the wings that come with. A growing attraction between Nikki and two of her protectors presents a whole other danger. While she risks a broken heart, Mace and Raven could lose everything, including their souls. As the mysteries behind the boys’ powers, as well as her role in a scientist’s dark plan, unfold, Nikki is faced with choices that will affect the future of an entire race of heavenly beings, as well as the precarious equilibrium of the earthly world.
(Synopsis taken from Goodreads.)


My Thoughts:
I read this for the 2012 e book challenge. This book started off slowly for me. It was very hard for me to keep my attention focused on the book for long periods of time. Some parts of the book are very boring, such as some of the conversations between Krissy and Nikki. When Will is explaining about the Halflings and what they are, I also found that boring. Other scenes, such as the fight scene near the end, keep you on the edge of your seat. My favorite Halfling is Raven. I like his attitude and fighting skill. Instead of just trying to protect Nikki, like Mace did, he also taught her how to fight, which saved her life on several occasions. I personally thought Nikki was an okay character. She was very whiny in some parts of the story.  For example, everyone wanted her to be more girly and she kept complaining. The one time I thought she was very kick ass was when she killed the hell hound. This was a decently good book, but it had the potential to be so much better.

I received this book from the publisher from NetGalley in exchange for an honest review. I was in no way compensated for this review.
Posted by Kayla Eklund at Wednesday, January 18, 2012