The Keeper by Jessica Crawford Vernold 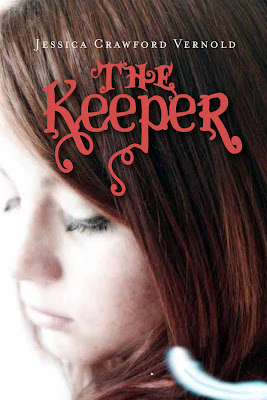 Synopsis:
Kaylee Carmichael thinks she's just ordinary but she couldn't be more wrong and wait until you find out who knows just how extraordinary she is. In The Keeper, sixteen year old Kaylee is a typical All American Tom boy spending her time at the barn instead of the mall. She makes an irrevocable mistake that claims the life of her best friend and she just can't pull it together. As a result, her parents decide to uproot the family and move from the Pacific Coast to a small town in Florida in the heart of the Deep South. She's never been good at making friends but when strange things start happening at the old plantation house she now calls home and she begins getting visits from the other side, she makes an unlikely friend, beautiful Zeke, an archangel sent to help her. She can't help falling for him even though she can't keep him, but things change when she finds out his dark secret that involves her best friend's death. Soon she finds herself in the clutches of one of the strongest fallen angels and he wants her for himself, but why? The keeper is the one person that the fallen need to gain control over because that person is the key to gaining power over souls in purgatory and heaven and Kaylee has no idea she is that person. Zeke and the other archangels are able to retrieve her just in time preventing Azza and his army from infiltrating the heavens. But where does that leave Kaylee and Zeke? They will have to choose between their love and his destiny. After discovering that Kaylee is indeed the keeper and the daughter of Michael the archangel she is able to be blessed properly. Azza is sent back where he belongs and Zeke has to return. However Kaylee and Zeke make a pact that in time he will chose life as a mortal in order to return to her.
(Synopsis taken from Goodreads)


My Thoughts:
This was a wonderful book. Probably my favorite that I've read so far this year. It kept me on the edge of my seat always wanting to know what was going to happen next. The characters were incredibly well written. When Kaylee was getting attacked by the evil spirits in her house, you could also identify and feel her fear. When she thinks about Cassie and the accident you feel pity for her. Zeke is also very well written. I just wish that his time before he met Kaylee was talked about a little more. I was very curious about it, even though it's not important to the story. Nick was written so well, he actually kinda scared me while reading the book. Some of the plot twists were pretty predictable, and I knew it was going to happen at the end of the book when I was about halfway through. Other plot twist left the read thinking, holy crap, where did that come from. The plot twist and the very end of the book completely floored me. I saw it going a completely different way than how it went. When the story ended, I felt like I was losing a friend. Even though it was a little predictable, I fell in love with this book, and would suggest it to everyone that likes suspenseful, YA, and paranormal books.

I received this book in exchange for an honest review, and was in no way compensated for this review.
Posted by Kayla Eklund at Saturday, January 07, 2012