Splattered Blood by Michael A. Draper 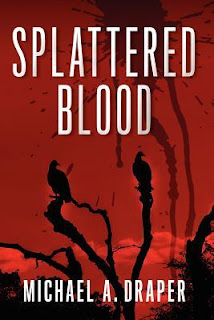 Synopsis:
THE CHIEF OF INTERNAL SECURITY for New England's professional basketball team, the Highlanders, is found dead in his office, with a suicide note and conflicting evidence of foul play. Refusing to believe he would have had reason to kill himself, and frustrated with the slowness of the police force's progress on the case, Johnny's widow, Roseanne, and best friend, Randy, launch a renegade investigation of their own. Aided by Roseanne's brother Graham, a fiercely protective loose cannon, they dig up evidence that Johnny, just previous to the date of his death, was running his own undercover investigation into the drug overdose of a star player for the Highlanders. The amateur detectives find themselves mixed up with a ruthless gang of mobsters, many of whom are responsible for the drug trade-and a string of violent murders - from Washington, D.C. to Boston. When their quest takes a gruesome and deadly turn, the three wonder if they're in over their heads. A gritty tale in the vein of Dennis Lehane and Robert B. Parker, Splattered Blood keeps readers guessing,with suspense and retribution on every page.
(Synopsis taken from Goodreads.)


My Thoughts:
Splattered Blood took me quite a while to read. It took me almost two weeks, which is very unusual for me. In my personal opinion, the book started off slow and stayed slow throughout the middle and end. Of course, that could be because it's not my usual genre to read. My favorite character was Evan. I liked his attitude, and how he wasn't afraid to get deep to get his story, even if it meant getting hurt or killed. At first, I couldn't stand Graham because of his arrogant and cocky attitude, but by the end of the book I liked him. I can honestly say there's not a character that I disliked in the book. The plot got confusing at times, with all the Russian characters with similar names. This book would be a good read for anyone who likes mysteries.

I received this book in exchange for an honest review and was in no way compensated for this review.
Posted by Kayla Eklund at Tuesday, January 31, 2012