ARC Review: Suck It Up and Die by Brian Meehl 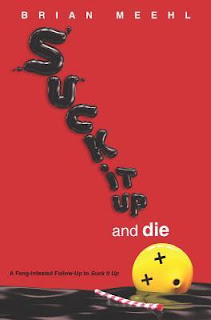 Synopsis:
Nearly two years after Suck It Up, all Morning McCobb wants is to complete his training at the NY Fire Academy and to stay head over heels in love with Portia for as long as the chronology-crossed lovers can, given that she's now eighteen and he's stalled at sixteen.It's nearly the first anniversary of American Out Day, the historic day on which the Leaguer vampires of America began going mainstream without going bloodstream on their fellow mortal citizens.The tension between Morning's wish for a simple, out of the spotlight life, and Portia's cinematic obsession with historic events escalates to the breaking point when a super-sinister vampire rises from the grave with a powerful thirst, for revenge.


My Thoughts:
I read this book for the 2012 ebook challenge. I must admit, when I heard they were making a sequel to Suck It Up, I was very skeptical. Suck It up ended very well, and left no loose ends for a sequel. However, the author pulled off Suck It Up and Die very well. The story starts out with American Out Day, which is kind of like a gay pride parade, only for vampires. The plot turns out to have been written very well. It captured my attention enough that I read the book in two days, which is extremely unusual for me. I liked all of the characters, except Rachel. In my personal opinion, she was very whiny and annoying and had so much more potential for character development. The plot twists were unexpected, which was a nice change of pace from the usual predictable stuff I read. I didn't see most of them coming at all. Suck It Up and Die will have you on the edge of your seat wondering what happens next. Suck It Up and Die will be released on 8/12/2012.

I received this ARC in exchange for an honest review, and was in no way compensated for this review.
Posted by Kayla Eklund at Thursday, February 02, 2012