A Ranger's Tale by Mysti Parker 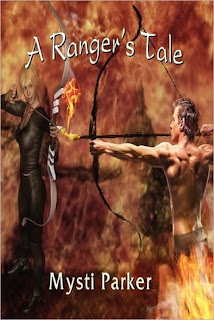 Synopsis:
Once upon a time an elven noblewoman longed to leave her gilded cage. A half-breed former pirate wanted nothing more than to escape his guilty past. Easier said than done... In the fantasy world of Tallenmere, the high elf, Caliphany Aranea, nearly a century old, has never been allowed to travel farther than a few miles out of the capital city of Leogard. Her father, Sirius, leads the Mage Academy, and after losing his only son, he expects Caliphany to take his place one day. The trouble is, she doesn't want to study magic and doubts she'll ever be as good a wizard as her father. She dreams of leaving Leogard to explore the world and strike out on her own--lofty goals for Sirius' daughter, who also happens to be King Leopold's niece. When two brutes at Leogard Harbor attempt to kidnap her while she dreams of faraway lands, half-elf ship captain and ranger, Galadin Trudeaux, comes to her rescue. From their first chance encounter, to the finale, where Caliphany must decide where her heart truly lies, she and Galadin will face more adventure, more love, more heartache, than they ever thought possible. Through it all, they discover the power of forgiveness and of a love that stands the test of time.
(Synopsis taken from Goodreads)


My Thoughts:
I read this for the 2012 ebook challenge. Wow, this book was very powerfully moving. It touched heartstrings and made me laugh, scream, and cry. I love the characters, especially Galadin. My heart went out to Caliphany when she had to choose between the two men she loved. Some people might think she was wishy-washy or whiny, but I think she was strong for picking one man and sticking to her pick. The author wrote the plot very well. It had me turning pages and not wanting to put it down because I had to know what happened next. I like how Caliphany broke our of her gender boundaries and her father's clutches to become a ranger, even though she's a woman royalty. I recommend A Ranger's Tale for anyone that likes fantasy stories, or is just looking for a good read.

I received this ebook from the author in exchange for an honest review, and was in no way compensated for this review.
Posted by Kayla Eklund at Friday, February 03, 2012