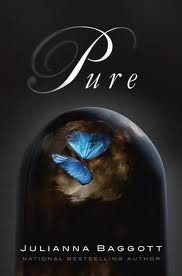 Synopsis:
We know you are here, our brothers and sisters . . . Pressia barely remembers the Detonations or much about life during the Before. In her sleeping cabinet behind the rubble of an old barbershop where she lives with her grandfather, she thinks about what is lost-how the world went from amusement parks, movie theaters, birthday parties, fathers and mothers . . . to ash and dust, scars, permanent burns, and fused, damaged bodies. And now, at an age when everyone is required to turn themselves over to the militia to either be trained as a soldier or, if they are too damaged and weak, to be used as live targets, Pressia can no longer pretend to be small. Pressia is on the run. Burn a Pure and Breathe the Ash . . . There are those who escaped the apocalypse unmarked. Pures. They are tucked safely inside the Dome that protects their healthy, superior bodies. Yet Partridge, whose father is one of the most influential men in the Dome, feels isolated and lonely. Different. He thinks about loss-maybe just because his family is broken; his father is emotionally distant; his brother killed himself; and his mother never made it inside their shelter. Or maybe it's his claustrophobia: his feeling that this Dome has become a swaddling of intensely rigid order. So when a slipped phrase suggests his mother might still be alive, Partridge risks his life to leave the Dome to find her. When Pressia meets Partridge, their worlds shatter all over again.
(Synopsis taken from Goodreads.)

Pure started off pretty slow for me. It didn't get better until about halfway through the book. A couple of the plot twists were pretty predictable. The plot twist that happens with Pressia and Partridge I predicted before they even met. Other plot twists, such as the one near the end of the book, left me absolutely astonished. I'm really curious what the black boxes have in them, and what they do. I have a feeling that they are going to play a big role in the second book. I liked all of the characters. I wish the author would have given the reader more information and background story about Lyda and Aribelle, but that might happen in the second book. Even though Partridge's dad, Ellery Williux, was an evil character, I liked him and agreed with a couple of his views and philosophies. I believe that he thought he was doing the right thing for his family, and just got a little twisted and messed up somewhere along the way. The plot had a few holes in it, but for the most part, was well written. Pure was a bit too disturbing at times for me. It had a lot of graphic details about how the people were scarred and fused to things during the detonations. Pressia's grandfather's fan in his throat kind of creeped me out in the beginning and made me a little nauseated reading about it. I recommend this book for people that are looking for a dystopian book that is different from anything written in the genre. I look forward to reading the second book.

I received this ARC from Grand Central via Netgalley in exchange for an honest review. I was in no way compensated for this review.
Posted by Kayla Eklund at Thursday, February 23, 2012