Infopill: Guest Review of There Goes the Galaxy by Jenn Thorson

I have asked my fiancee, Seth, to step in and do a guest review of There Goes the Galaxy, a book I received but couldn't finish. He will be doing guest reviews from time to time on my blog. 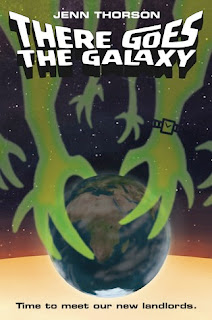 Synopsis:
It’s the age-old tale of boy meets alien abductor. Boy meets stun-gun. Boy learns he’s the only one who can save the Earth from Extreme World Makeover by interstellar landlords. Yeah: he thinks it’s a bit much, too. Like everyone else on his planet, Bertram Ludlow hasn’t paid much attention to fluctuations in the intergalactic real estate market. But as a cognitive psychology grad student, he has given some thought to what a complete mental breakdown looks like. And this is pretty close. Now he’s discovering space is a mad and mind-boggling place where interspecies communication rests on the power of a gumball. Where androids demand better work/life balance. Where crime is Art, technology still has its bugs, and lasers don’t actually go “pyew-pyew.” It’s also surprisingly easy to get on the Universe’s Most Wanted list. So with the weight of the world on his shoulders and the cosmic law on his tail, can Bertram outrun, outwit and out-bid to save the Earthling squatters from one spaced-out redevelopment plan?
(Synopsis taken from Goodreads)

Seth's Review:
The book was good, save one or two continuity issues in the story line (which I might not be remembering correctly). I had a lot of fun reading There Goes the Galaxy. Though at times, the puns were laid on a bit thick, such as Seers of Roebuck, podunk, and par too. As a fan of hardcore sci-fi, this was a welcome relief from having people dying in the first paragraph or two because they forgot to test the air for pathogens.

Seth gives There Goes the Galaxy: 4/5.