Chronicles of the Undead by A.F. Stewart 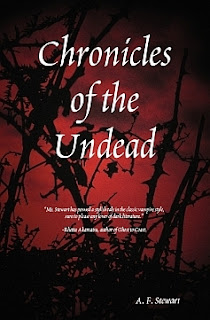 Synopsis:
Family Secrets. Three generations of one family share their intimacies with the world of the vampire.Inside the personal journals of the Harrington family a dark and dangerous odyssey unfolds.Three members of this tormented family, Samuel, his son Edmund, and Edmund's daughter Charlotte, struggle during the 18th and 19th century in London, England, as the lives of this family intersects with supernatural forces. Two intriguing vampires befriend, manipulate and play with all three souls, altering their lives forever.Their fears, private confidences, and weaknesses are revealed on the pages as one selfish act ends in horrific tragedy, with far-reaching consequences.Find out who succumbs to the seduction and danger of the vampire, and who grapples to combat the evil influence that permeates their lives. Content may not be suitable for children.


My Thoughts:
Chronicles of the Undead is a decently good short story. It's a diary in three parts. The first part is about Samuel Harrington, the father who becomes a vampire. The second part is about Edmund Harrington, the son who becomes a vampire hunter. The third part is about Charlotte Harrington, the granddaughter who follows in her father's footsteps. I love reading stories in diary formats, and this book was no exception. It made for a quick, fun read. I didn't have a favorite character. The character I liked the least was Eleanor. She was a very weak woman. She let her husband beat her, belittle her, and generally treat her horribly. She took it without complaint, or telling someone, or leaving. Otherwise, the book was good. I just wish it would have been a little longer, and gave more information about what happened to Edmund after his journal entry ended. I recommend this book for vampire fans.

I received this book in exchange for an honest review. I was in no way compensated for this review.
Posted by Kayla Eklund at Saturday, June 02, 2012