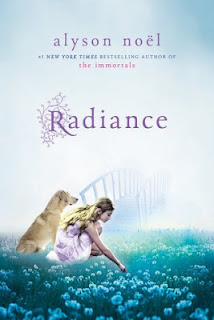 Synopsis:
Riley Bloom left her sister, Ever, in the world of the living and crossed the bridge into the afterlife—a place called Here, where time is always Now. Riley and her dog, Buttercup, have been reunited with her parents and are just settling into a nice, relaxing death when she's summoned before The Council. They let her in on a secret—the afterlife isn't just an eternity of leisure; Riley has to work. She's been assigned a job, Soul Catcher, and a teacher, Bodhi, a curious boy she can't quite figure out.Riley, Bodhi, and Buttercup return to earth for her first assignment, a Radiant Boy who's been haunting a castle in England for centuries. Many Soul Catchers have tried to get him to cross the bridge and failed. But he's never met Riley...


My Thoughts:
Radiance is the first book in the Riley Bloom series. The Riley Bloom series is a spin off of Noel's Immortals series. I love the Immortals series, so when I learned about the Riley Bloom series, I was very excited. While Radiance wasn't as good as the Immortals series, it didn't disappoint. I was hoping that it would have more of Riley's point of view from when she was in Summerland and helping Ever, but it didn't. The book is about Riley crossing over and adjusting to her new job as soul catcher in the Here and Now. The plot was okay. The middle of the book got a little boring for me at times. Riley was a whiny character, which got annoying during some parts of the book. My favorite character was Buttercup. He made me laugh quite a few times. For example, when he was flying and trying to chase birds but he kept going through them. I liked Radiance and will definitely be finishing this series sometime in the future. I'm excited to see what the author does with the series and where she takes it. I recommend this book for fans of ghost stories. I also recommend it for fans of the Immortals series, or any of Alyson Noel's previous works.

I rented this book from the library. I was in no way compensated for this review.
Posted by Kayla Eklund at Sunday, June 17, 2012