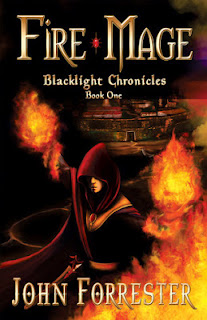 Synopsis:
For centuries, mages perfected magic at the Order of the Dawn. Mastery over fire, wind, and storm. They live in the last free city in a world plagued by dark sorcerers. Talis Storm and friend Mara discover a terrible secret. The Jiserian Empire has targeted their city for attack. An army of undead soldiers. Flying necromancers. None have ever survived. When a surprise aerial invasion hits the Order’s temple, Talis casts fire magic for the first time. But his spell is wild and does more harm than good. Sorcerers try to capture Talis and Mara. They flee into the temple crypts. Awoken from an ancient rest, a fallen champion slays the sorcerers and gives Talis a legendary map. The map leads them on a quest to discover the lost temple of the sun. To save his city, Talis must discover the power of magic locked away inside the ancient temple. And become a true fire mage.


My Thoughts:
Fire Mage was a great short novel. The plot was wonderful and kept me on the edge of my seat. I finished the book in a little less than twenty four hours. The setting was very detailed. I thought the concept of The Blood Dagger was interesting and original. The Blood Dagger is where you fight until you're hurt enough that a healer has to be called in. You don't find a lot of things like that in YA books. The characters were well written. Mara was my favorite character. I liked her spunk. She was locked in a room so she wouldn't be around Talis, but she escaped and went with him on the journey anyways. She also wasn't going to accept things that she didn't like, such as becoming engaged. This was an incredible book. I will definitely be reading the rest of the Blacklight Chronicles series in the future.

I received this book from the author in exchange for an honest review. I was in no way compensated for this review.
Posted by Kayla Eklund at Wednesday, June 13, 2012