A Life Aligned with Mary Magdalene by Renee Michelle Christian 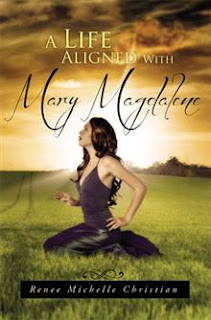 
Mary was born an American army brat in Germany. Her ancestors originated from Paris, France.
The family moved back to the United States with her at a young age of three years old. She grew up a troubled child with the war’s rippling effect on her family. In her teenage years, her life became aligned with Mary Magdalene as suggested by a stranger. Each decade that passed, she was reminded of her similarity to Mary Magdalene in terms of her appearance and character. Through a near-death experience, her views on life are changed forever.
She dreamed of meeting her Prince Charming from another land since her childhood days.
Following a life of trauma, she finds herself suddenly standing before the man of her dreams—a man she had met twenty-seven years prior and longed to be reunited with. A spiritual sensation takes over, and as independent and resourceful as she is, her longings for deep and lasting intimacy supersede any selfish inclinations.
Mary was the first person to arrive at these different locations; she was by no means the only witness, named by any of the authorized gospels as a witness to Jesus’s crucifixion, His burial, and the discovery of His tomb to be empty. Could her soul have longed for Jesus since she lost Him at an early age by such violence and controversy? Could her lifelong desire to unite with Prince Charming be her Jesus in the flesh so that she might rest her soul? Or could modern-day Mary have been a student of Mary Magdalene who has come to prepare the way for Mary Magdalene’s second coming in balance of man and woman, Jesus and Mary?

My Thoughts:A Life Aligned With Mary Magdalene was a good novella. It sounds like it would be a Christian novel, but due to an f-word , I wouldn't consider it such. However, it was a very good book. In the book, Mary finds out that she is a lot like Mary Magdalene. She also has a spiritual awakening through Jesus Christ. The meeting scene was a little confusing. I didn't understand what was going on until a few pages into it. It was interesting hearing about Mary's life as a prostitute. The pimp was a bit scary at times. I felt bad for Mary, but I didn't understand how she could let him treat her the way he did. I also didn't understand why, in her next relationship, she knew the signs that her boyfriend was being abusive, but still went back to him everytime. I liked this book. The story of Mary was very inspiring to me. She had a very rough life, but she still made the best of it. I am excited to read the next book in the series when it is released. I can't wait to find out what happens between Mary and her Prince Charming.

I give A Life Aligned with Mary Magdalene: 3/5.

I received this book from the author in exchange for an honest review. I was in no way compensated for this review.