Guest post with Dan Cohen, author of Masters of the Veil 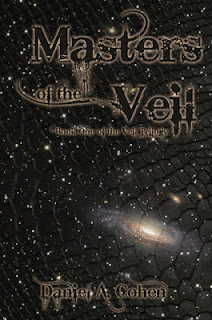 So before “Masters of the Veil,” happened, Dan sat down and interviewed some of his characters. We won’t get into the details of how Dan got into Atlas Crown (the magical community where the story takes place), but let’s just say it wasn’t easy.

Daphne Sunder: Beautiful, intelligent, and one of the most popular young sorcerers in Atlas Crown.

Cassiella Pyx: Shy, kind, and sort of nerdy. Even though she keeps a low profile, she is also one of the more powerful young sorcerers.

Glissandro Thicket: Glissandro is a young, mute sorcerer who speaks magically through music. He uses the horn of a skull-wolf to create his musical language. He also keeps to himself.

Rona Rono: Teaches the best young sorcerers in Atlas Crown (Daphne, Cassiella, Glissandro, and Petir). Was a tribal king in Africa before he was brought to Atlas Crown.

May: Liaison from Atlas Crown to the outside world.


Here are some of the highlights of the interview.

Sam Lock: I’m living it, baby! Did you see how many scouts were at my last game?

Petir LaVink: You don’t belong here (at this point, Petir raises his second-skin* at Dan). You’re lucky May says you’re ok, or I would… You know what? I’m leaving (he leaves the room in a huff).


Daphne: Easy. I’m going to be head grower some day. Can you Just imagine being in charge of the seven grow fields? Just being around all the animals, and plants, and colors. It’s like the most important job in Atlas Crown.

Glissandro: <Translated from music> To be the first in my family to go through mystical Omani** I want to make my brother proud.


*A hand covering made from magical materials, which allows you to “grip” the Veil. Essentially, it’s how you do magic.


Dan asked: “What’s your favorite thing to do?”

Daphne: Well, me and my girlfriends love to go to the hot springs and relax. (She shrugs) And it doesn’t hurt that there’s usually some cute guys there.

Glissandro: <Translated> The Tinker Hut. You should see all the magical contraptions he has. Buttons that change the fabric of your robe, dancing figures, detectors, little globes that you shake and it snows around you. And there’s always something new.

Rona Rono: I teach. There’s nothing I like more. The first time one of my students drapes* an object, well, there’s no better feeling.

*Draping is a magical technique that involves wrapping the Veil around something to give it magical properties.


Sam Lock: (Grinning like an idiot) Did you say magic? You mean figuratively, right? Because there was this one-handed catch I had where I dove [rest of answer omitted because of extreme length].

Daphne: One time I was with May in the grow fields and she called like every bird in Atlas Crown. Thousand of birds, every color imaginable, all came and May tossed handfuls of seeds into the air and the birds each caught one and flew away. I’ve never seen anything more beautiful. There was no chaos. The birds all fell in line like a dance. May said that another magical community had lost one of their fields—she never told me how—so she was sending a new one. It doesn’t get much better than natural magic.

Cassiella: I love watching Rona. He can drape anything. He made me a wooden flower that only blooms on the full moon, but when it opens up it gives off whatever smell would make me most happy. Last moon it smelled like honey and nettle-melon.

Rona Rono: (His eyes darken) If you don’t mind, I’d like to skip that question.

After the interview, the characters shared their thoughts on meeting Dan:

Sam Lock: He’s kind of small. I doubt he’d be very good on the field. He’s not like the son of a coach or something, is he? Oh. He’s a writer? Yeah, that makes more sense. So why did I meet with him?

Daphne Sunder: I guess he seems nice. Not my type. It’s not his fault though, I just wouldn’t ever date a flathand*.

*A flathand is someone who cannot connect with the Veil.

Cassiella Pyx: I really like blue eyes (at this point in the interview, Cassiella blushes). Don’t tell him I said that!

Rona Rono: (Shakes his head) He seems to have the right heart, but She [The Veil] hasn’t chosen him. It’s too bad. I would have loved to teach him. 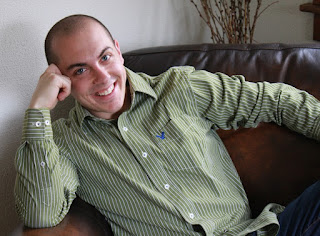 Thank you Dan for stopping by the blog today. Would like to know more about Dan and his book? You can find him at Goodreads.
Posted by Kayla Eklund at Thursday, July 05, 2012