Drain You by M. Beth Bloom 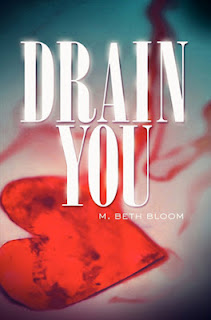 Synopsis:
Every night I'd lie there in bed and look out at the hills behind our house, listening. I knew there'd be consequences.Actions meant reactions. Sunrises meant sunsets. My fear was too permanent, lasting longer than eyeliner, something I wore every day and didn't wash off.Quinlan Lacey's life is a red carpet of weird fashions, hip bands, random parties, and chilling by the pool with her on-and-off BFF Libby. There's also her boring job (minimum wage), a crushed-out coworker (way too interested), her summer plans (nada), and her parents (totally clueless). Then one night she meets gorgeous James, and Quinn's whole world turns crazy, Technicolor, 3-D, fireworks, whatever.But with good comes bad and unfortunately, Quinn's new romance brings with it some majorly evil baggage. Now, to make things right, she has to do a lot of things wrong (breaking and entering, kidnapping, lying, you name it).There's normal, and then there's paranormal, and neither are Quinlan's cup of Diet Coke. Staying sane, cool, in love, and alive isn't so easy breezy.


My Thoughts:
Drain You is very hard for me to rate. I loved the story line. It held my attention and was a lot of fun to read. However, it had quite a few flaws. The biggest flaw for me was the irresponsible parenting. Seriously, who tells their teenager, "Be back whenever, I don't care"? When Libby (the main character's best friend) is gone for days at a time with her boyfriend, her mother doesn't care at all or do anything to stop the behavior. Most of the parents in the book, like the Sheets' parents, are gone for long periods of time. The second thing that bothered me about the book was that the 90's references seemed cliche. It almost seemed the author would randomly throw one or two in, then would shortly after forget she was writing in the 90's time period. I understand that people used cool, dude and like quite a bit in the 90's but I don't think they used it that much. I don't want to hear the word cool again for quite a long time. Other than those few things I liked the book. I finished it in just a few hours because I couldn't put it down. I liked most of the characters aside from Libby. I could not stand her. I thought she was a whiny, ungrateful person. She was also a horrible friend. I liked James, but he made me mad because of the whole 'I'm going to sleep with you then leave and not tell you where I'm going or when I'll be back' thing. OH! This brings up my other thing I had against this book. I'm not a big fan of sex in young adult books, and although the scenes weren't overly descriptive, they were still there. My favorite character was Whit. I liked his attitude. I also like that he kept Quinn happy no matter what she was going through. I liked Drain You, but I didn't love it. I reccomend it to fans of paranormal romance and for older YA (16+).

I received this book in exchange for an honest review. I was in no way compensated for this review.
Posted by Kayla Eklund at Tuesday, July 24, 2012