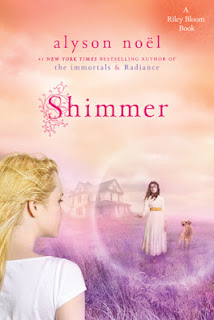 Synopsis:
Having solved the matter of the Radiant Boy, Riley, Buttercup, and Bodhi are enjoying a well-deserved vacation. When Riley comes across a vicious black dog, against Bodhi’s advice, she decides to cross him over. While following the dog, she runs into a young ghost named Rebecca. Despite Rebecca’s sweet appearance, Riley soon learns she’s not at all what she seems. As the daughter of a former plantation owner, she is furious about being murdered during a slave revolt in 1733. Mired in her own anger, Rebecca is lashing out by keeping the ghosts who died along with her trapped in their worst memories. Can Riley help Rebecca forgive and forget without losing herself to her own nightmarish memories?

My Thoughts:
Shimmer was a decently good sequel to Radiance. I think I liked Radiance better though. Shimmer started off kind of slow and boring. It took about fifty pages before I really got into it(for page counters that's a third of the book). Riley has matured a bit more than the first book. We get more of a glimpse into her life when she was still alive. I was also excited to be able to learn Bahdi's story. The book finally gave a lot of information about him. There were a few plot holes and spelling errors. When I read the book, I had a hard time liking any of the characters. Even though Riley matured, she still has whiny, bratty tendencies which make her annoying at times. I couldn't stand Rebecca, one of the new characters. She was a spoiled brat and a horrible person. Riley took pity on her after hearing all of her story, but I couldn't. The prince seemed weird and freaky at first. However, towards the end, I felt bad for him. After hearing Bodhi's story, I felt sad. For someone to have to go through that guilt and suffering is horrible. He was so caught up in his own grief that he didn't realize it wasn't his fault. I wasn't very impressed with this book, but I will continue this series because it is a short read. I recommend this book for people who have read Radiance.

I rented this book from the library. I was in no way compensated for this review.
Posted by Kayla Eklund at Thursday, July 19, 2012