Seth's review of The Last American Vampire by Seth Grahame-Smith 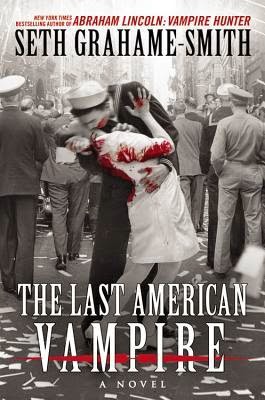 Synopsis:
In Reconstruction-era America, vampire Henry Sturges is searching for renewed purpose in the wake of his friend Abraham Lincoln's shocking death. It will be an expansive journey that will first send him to England for an unexpected encounter with Jack the Ripper, then to New York City for the birth of a new American century, the dawn of the electric era of Tesla and Edison, and the blazing disaster of the 1937 Hindenburg crash. Along the way, Henry goes on the road in a Kerouac-influenced trip as Seth Grahame-Smith ingeniously weaves vampire history through Russia's October Revolution, the First and Second World Wars, and the JFK assassination. Expansive in scope and serious in execution, THE LAST AMERICAN VAMPIRE is sure to appeal to the passionate readers who made Abraham Lincoln: Vampire Hunter a runaway success.
(Synopsis from Goodreads.)

If anyone has bothered to read my infrequent reviews, they would know I don’t give out 5 out of 5 reviews often. When I first read the book, Abraham Lincoln: Vampire Hunter, I rolled my eyes and wondered what I was getting myself into. I couldn’t help it, the premise was absurd, or so I kept telling myself all the way up to the last page after a sleepless night of reading it. Then they left a spoiler for the next book. So, I was eagerly awaiting that. Suffice it to say, it went about the same way with this book as it did the first. I love how my wife seems to be able to pick out the books I like to read even before I know I will like them. She’s got a knack for that it seems, I mean she just brought me coffee while I’m writing this review without me having to ask her. Anyways, if you like historical fiction I highly recommend this book.

I received this book from the publisher, via NetGalley, in exchange for an honest review. Neither Seth nor I were compensated in any way for this review.
Posted by Kayla Eklund at Tuesday, April 21, 2015